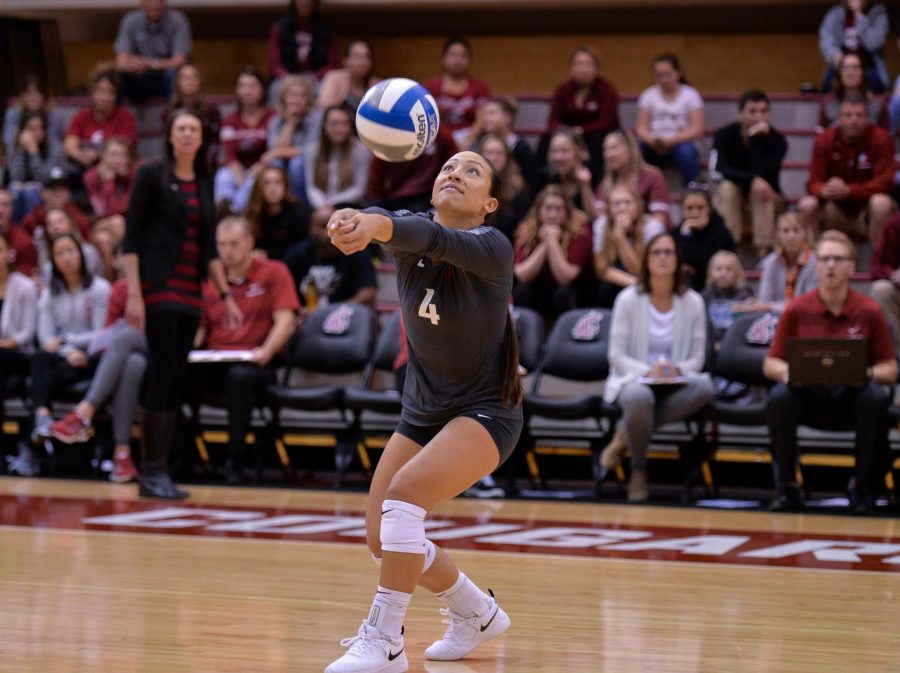 Junior libero Alexis Dirige hits the ball in the game against the the University of California, Los Angeles on Sunday in Bohler Gym.

No. 18 WSU volleyball will host Arizona State University on Sunday. The Cougars currently are coming off of a four-game win streak and will look to keep that winning streak going as they face the Arizona teams.

On Oct. 5, WSU traveled to Tempe, Arizona, to face the Sun Devils for the first time of the season. In this match, the Cougars swept the opponent, taking home the win in only three sets.

Head Coach Jen Greeny said she thinks her team needs to focus this weekend in order to beat the Sun Devils again.

“We beat Arizona State 3-0 down there, you know we expect them to bounce back and kind of want to play well here against us,” Greeny said. “I think every team when you’re facing them a second time, especially when you have beat them, maybe has a little bit of revenge for you.”

WSU currently holds a 17-5 overall record and an 8-4 conference record with all five losses being on the road. The Cougars have a perfect 7-0 record at home this season and with six of their last eight matches being at home, they will look to pick up several wins for the rest of conference play.

Arizona State currently has a 13-11 overall record and has struggled in the Pac-12 as its record in conference play is 4-8. The Sun Devils are currently coming off a six-game losing streak, two of those losses being on the road.

Senior outside hitter Taylor Mims played a key role in the Cougars’ offensive attack early this season. However, recently Mims was injured and has not played in the last five matches. With Mims out, senior outside hitter McKenna Woodford has stepped up to fill the missing role.

In the last five matches, Woodford has tallied a combined 94 kills and lead the team in four out of these five matchups. Although Woodford has led the team the majority of these matches, she said she still believes everyone on her team has stepped up since the injury of Mims.

“It’s a complete team effort, I can’t do it on my own, clearly,” Woodford said. “I mean, other teams know where the ball is going when I’m out there. But it takes every single person on our team to step up.”

The team truly has stepped up since the injury as it has won four of the five matches played. The Cougars are looking to keep their momentum going this coming weekend and keep their undefeated record at home when they face both University of Arizona and the Arizona State.

WSU will face the Sun Devils at noon Sunday in Bohler Gym. The match can also be viewed on Pac-12 Networks.