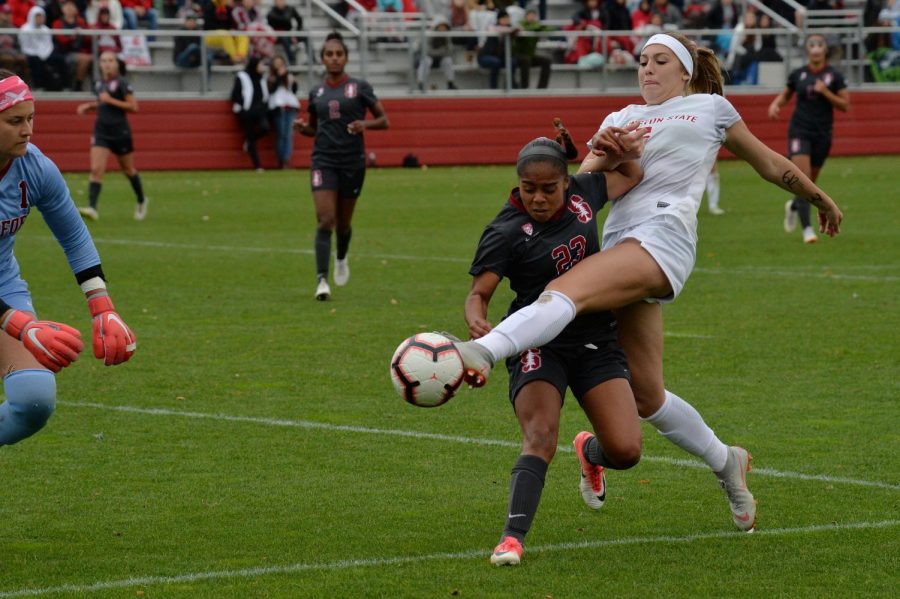 Junior forward Morgan Weaver attempts to get in a position to make a shot in the game against Stanford University on Sunday at the Lower Soccer Field. Weaver leads the team in total goals scored this season with nine goals.

WSU soccer will host University of Washington on Friday for the Apple Cup and its last game of conference play and the regular season.

After an intense game against No. 1 Stanford University on Sunday that ended in a double overtime 1-1 tie, the Cougars look to end their season with a win.

Coming into this anticipated match against the Huskies, the Cougars recently had their own triumphs at home against the dominating Cardinal soccer team.

The close matchup showcased the defensive skills of WSU. With a persistent Cougar offense and an error on the Cardinal goalie, the eventual WSU goal was made by junior forward Morgan Weaver who tied the game in the 77th minute.

“Honestly I was just reading the goalie and she just didn’t play the best pass to her outside back,” Weaver said. “I was able to cut it off and I took a touch forward and I looked up and she wasn’t in the goal and I shot. I was like, ‘Please go in.’ ”

Weaver leads the team for most goals and with the score against Stanford she now has nine on the season. She also has four assists and a .417 shot on goal percentage.

Head Coach Todd Shulenberger said he is proud of Weaver’s efforts and contributions to the team.

“She’s not just an athlete anymore, [Weaver] is a complete soccer player that is athletically gifted, hard-nosed and can score goals,” Shulenberger said. “She’s becoming more and more dangerous as this team keeps growing”.

After a long double overtime game, the Cougars will look to take the confidence they gained from staying competitive with the top-ranked team in the nation into the matchup with their purple and gold rivals from UW.

Both of these teams have had rough conference seasons coming into the Friday matchup. The Huskies have an overall record of 8-9-1 and are 3-7 for their conference season. Their wins came from victories over both University of Oregon and Oregon State University and most recently a 4-1 defeat of University of California, Berkeley, on Sunday.

Before the Huskies’ victory over Cal, they were on a six-game losing streak, with the most recent loss in Husky Soccer Stadium against Stanford by two goals. During this losing streak, the Huskies also lost by two goals at home against University of California, Los Angeles, a team WSU has beaten.

WSU is 11-5-1 overall and holds a 4-5-1 conference record, with three of its victories coming against the same teams the Huskies beat plus its first Pac-12 win of the season against UCLA.

This match has great significance for both teams as they compete to have good standings in the NCAA Tournament that starts Nov. 9.

“It doesn’t matter who this opponent is,” Shulenberger said. “Friday, when those lights go, we mean business and our goal was to move on from here.”

The Cougars will take on the Huskies 7 p.m. Friday at the Lower Soccer Field. The game can also be seen live on Pac-12 Networks.