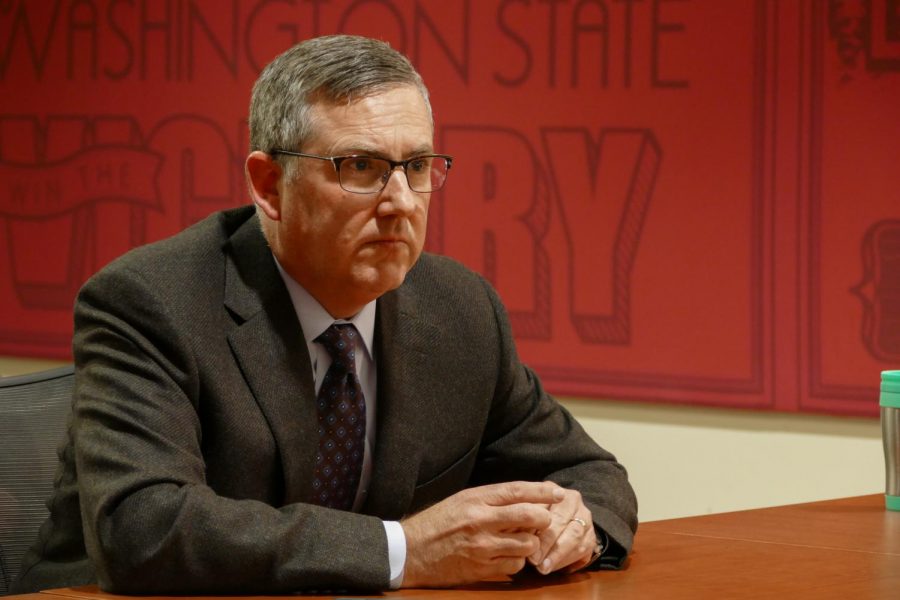 "Other presidents and I talk a lot about how much is enough and how to meet students’ needs,” WSU President Kirk Schulz said as he listens to concerns posed by the ASWSU senators Wednesday night.

Catching up with the president

The meeting started with a question and answer session with Schulz, where senators asked about funding for the new WADDL, mental health and campus politics.

Senators and Schulz discussed their concerns about mental health issues regarding the recent posts from a WSU student’s mother about the student’s negative experience with Cougar Health Services.

According to the mother’s tweets, her son tried to get help from the university’s mental health services and was put on a waiting list. He later attempted suicide, the mother wrote in her tweets, and explicitly mentioned the university’s “failure in helping him.”

Schulz said WSU is going to examine how Cougar Health Services does its initial screening for mental health issues and if it is effective.

“Other presidents and I talk a lot about how much is enough and how to meet students’ needs,” Schulz said.

ASWSU Vice President Tyler Parchem said he will be meeting with a committee to discuss funding for more counselors on campus and decreasing the wait time for students seeking help.

The funding could come from Senate legislation, lobbying and federal resources, he said.

One senator raised concerns over plans by the WSU College Republicans to build another Trump-inspired wall soon.

The first Trump wall, erected in October 2016, resulted in heated debates and hundreds of counterprotesters.

Schulz said legally, WSU cannot take any action against groups exercising their rights on campus, but he wants students to feel safe by placing police at the site.

“The Trump wall students are going to build is an unfortunate example,” he said, “but we can’t prevent people from putting up something offensive.”

A major concern for Schulz is making sure students, staff and faculty are required to complete training in cultural competency, he said.

Schulz also discussed funding for the WADDL building that is in progress.

WSU received funding for one and a half of the WADDL projects from state legislation last year and plans on receiving the rest of the funding in the next legislative session, he said.

“The timing should be smooth and polished,” Schulz said.

Quinton Berkompas, deputy director of Legislative Affairs, reported there are about 156 students who have received provisional ballots that do not actually count in the upcoming election because those students have a hold on their registration.

The hold can be from handwriting errors on the registration form or if someone has the same name and last four Social Security numbers, he said.

Berkompas said he would attempt to contact affected students before Election Day. He said they can also call or email the Whitman County Elections Office to activate their ballots.

“I want to focus on building better citizens and you can do that by voting,” Berkompas said.

The ASWSU Senate confirmed sophomore Isabella Spayd to fill one of the Judicial Board seats Wednesday night.

Junior Rachel Ring was also confirmed to the deputy director of communication position.