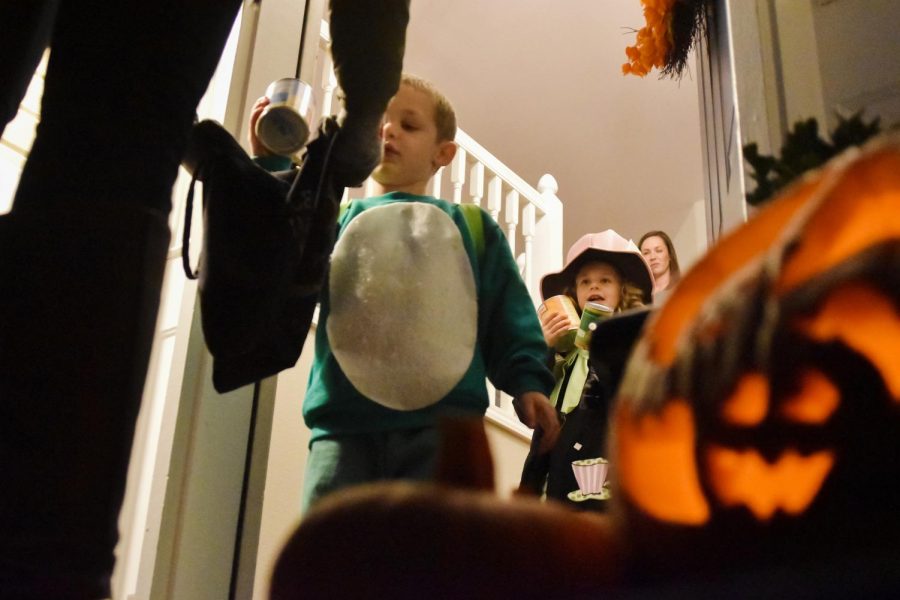 Volunteers went door-to-door Wednesday night in the Sunnyside and Pioneer Hill neighborhoods collecting canned goods for the WSU food pantry. The event was organized by graduate students from the Department of Crop and Soil Sciences, part of CAHNRS.

The third annual Trick or Treat So Others Can Eat saw its largest-ever volunteer turnout this year, said Rachel Breslauer, organizer and graduate student. In past years the fundraiser had only been advertised within the Crop and Soil Sciences department, but this year the group attempted to expand and recruit volunteers from the larger WSU community, she said.

“We were so excited to open it up and get more people involved,” Breslauer said. “We’ve easily doubled the amount of houses on our routes this year.”

Roughly 20 volunteers met around 5 p.m. outside Johnson Hall, where they were given maps of the neighborhoods they would be canvassing and instructed on how to introduce themselves.

From there four trucks of five volunteers headed out to their destinations. After arriving, the team would split into two groups of two, walking the same direction down opposite sides of the street. One of the organizers drove a block or two ahead in a truck, allowing the canvassers to drop off food along the way.

Volunteers distributed flyers last week to houses along the routes so they could prepare with canned goods, toiletries and pet food, organizer Erika Kruse said.

In past years, efforts have been on a much smaller scale because there were fewer volunteers, Breslauer said. She said last year, for example, one person or group would have to work both sides of the street while a single driver picked up food from each group when they collected too much to carry.

Nikayla Strauss, one of the original organizers who started the event three years ago, said the idea came from looking for a philanthropic effort the Soil and Crop Sciences Graduate Student Association could participate in.

“We figured this would tie in nicely because all of our careers are focused on food and agriculture and food security,” Strauss said.

The first year the event raised 300 pounds of food and the second raised 800, Strauss said. The group is anticipating more this year because of the increased coverage and manpower, Breslauer said.

All proceeds will go to WSU’s food pantry which directly supports WSU students. Breslauer said if the WSU food pantry is overstocked, it will redistribute its supply to the Community Action Center food bank and donations of pet food will go to the Whitman County Humane Society.

Breslauer said she hopes the event can expand in the future and become recognizable as a Halloween tradition by families in Pullman.

“That would be really cool over time if people just started knowing,” she said. “Maybe in a couple years if we keep this momentum going it could be a really good thing.”