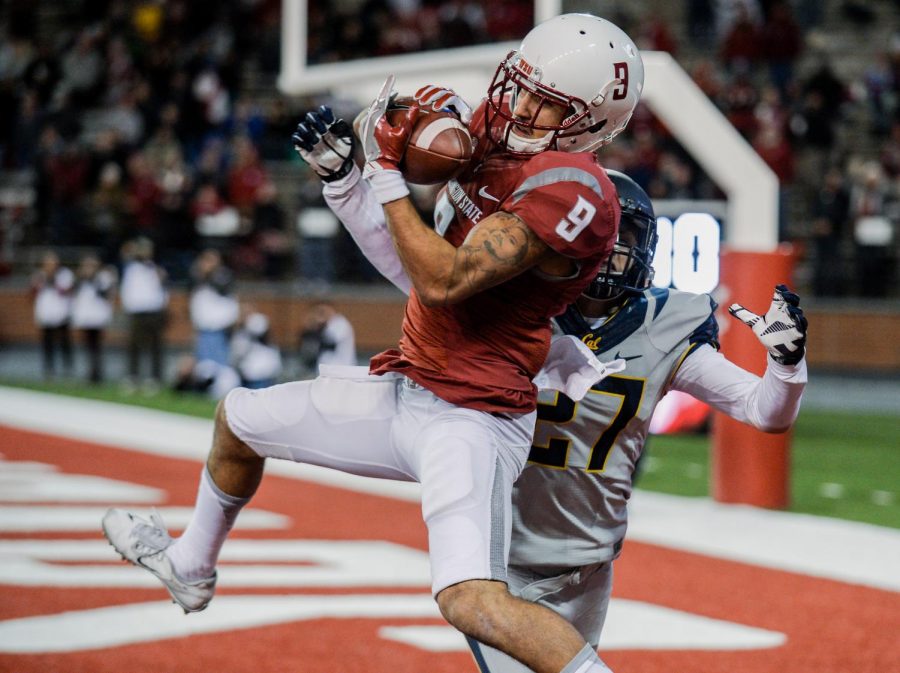 Former WSU wide receiver Gabe Marks catches a touchdown pass during the game against Cal on Nov. 11, 2016, at Martin Stadium.

Revenge is a dish best served cold, as the saying goes. Revenge is what the Cougars hope to serve the University of California, Berkeley, on Saturday night at Martin Stadium, where it’s forecasted to be below 50 degrees Fahrenheit for the 7:45 p.m. kickoff.

The No. 8 Cougars (7-1) have won four consecutive Pac-12 conference games after losing their first one to University of Southern California. However, WSU is looking to exact some revenge on the Golden Bears after last season when a lackluster performance in Berkeley snapped their undefeated start and resulted in a blowout.

“We need to lock into this game,” Head Coach Mike Leach said. “Not a lot that happened last year transfers to this year, we just got to focus on right now, this game.”

The Cougars will be led on offense by starting quarterback Gardner Minshew II, who has caught the national spotlight and emerged as a Heisman Trophy candidate. Minshew leads the nation in passing yards with 3,183 yards. Over 300 yards separate him from second place and he is the only quarterback in the country with over 3,000 yards passing.

Leach said he believes Minshew is the best in the business.

The Cougars have also gotten a lot of offensive help from their running backs, redshirt junior James Williams and freshman Max Borghi, as both scored touchdowns against then-No. 24 Stanford University last Saturday.

However, the Cougars are expecting a big challenge this weekend from the Golden Bears (5-3), who are coming off a big upset against then-No. 15 University of Washington.

Leach said the Cougars will face a tough defense Saturday.

“[Cal’s] defensive backs are quick and they run around, they run the ball pretty good,” Leach said. “They can get some explosive plays and tangle you up.”

Cal opened the season 3-0, reaching as high as No. 24 in the rankings before losing three games in a row in conference play and then winning their next two. Cal’s offense is led by two quarterbacks who split time during each game, redshirt freshman Chase Garbers and redshirt sophomore Brandon McIlwain.

They both have been effective on offense, throwing for a combined 11 touchdowns. However, they also have a combined 11 interceptions, giving the Cougar defense an opportunity to create turnovers to stop Cal.

One man who will have a heavy workload on Saturday night is Cal redshirt senior running back Patrick Laird, who averages over 80 rushing yards a game but also makes some catches out of the backfield for a balanced Golden Bears passing offense.

The Cal defense has been performing at a high level lately, giving up just 17 combined points in its last two games with wins over Oregon State University and UW. The Golden Bears have given up the eighth-fewest passing yards in the nation this season.

Cal has the advantage in the series history against WSU with a 47-27-5 record against the Cougars and the Golden Bears taking last season’s game 37-3 in Berkeley. However, the last time these two teams met in Pullman in 2016, WSU defeated Cal 56-21.

This a must-win game for the Cougars if they want to keep their playoff hopes alive, but there is no place better to win than at home. WSU has won 11 consecutive games at Martin Stadium which is the third-longest streak in the program’s history.

Despite garnering national attention with a 7-1 record, Leach said he takes a one-game-at-a-time approach.

WSU faces the Golden Bears at 7:45 p.m. Saturday in Martin Stadium for Dad’s Weekend. The game can also be seen live on ESPN.