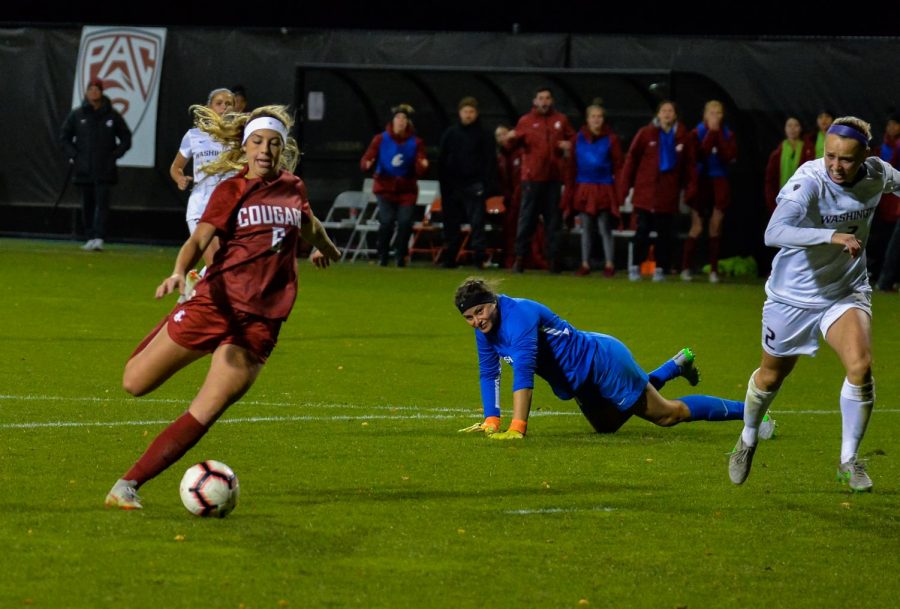 Junior forward Morgan Weaver takes a shot on the goal during the matchup against UW on Friday evening at the Lower Soccer Field. Weaver scored all three of WSU's goals, bringing her season total to 12.

WSU soccer defeated in-state rival University of Washington 3-1 on Friday night. This game ended Pac-12 Conference play for the Cougars leaving WSU with a 12-5-1 record on the season.

Junior forward Morgan Weaver scored all three of the Cougars goals on the night. Weaver said she was ecstatic about the victory and thinks the team will have motivation to compete well in the upcoming NCAA Tournament.

“It feels amazing, I think our team realizes that we’re good enough to compete with anyone here and no matter where we are at,” Weaver said. “I think that’s our big thing right now, if we have to go away, we need to bring it no matter what.”

The Cougars came out quick in the first half as junior forward Morgan Weaver fired a shot that landed right above Husky junior goalkeeper Siena Ruelas’ hands. This goal by Weaver put WSU on the score board in the 11th minute of the game.

After the goal by Weaver, WSU held possession the majority of the first half. The Cougars led the statistics at half as they fired off 11 shots and had seven corner kicks while UW only shot a total of three times with zero corner kicks.

The second half brought out the intensity of this rivalry matchup as both teams became more physical in their play. Throughout the next 45 minutes, the ball shifted back and forth between the two teams.

In the 62nd minute of the second half, Ruelas made the error of stopping the ball right in front of herself and scrambled to gain possession as Weaver was rapidly approaching. However, Weaver’s speed beat Ruelas hands and she landed her second goal of the night.

The momentum was in the Cougars hands, however, the UW offense came back only a minute later to earn its first goal of the night. Husky senior forward Pascale Dumesnil fired a shot right past the hands of redshirt junior goalkeeper Rachel Thompson to put the Huskies down by only one.

Weaver wasn’t done though and in the 88th minute she drove past both a Husky defender and Ruelas to score her third goal of the night, putting the game to an end with a final score of 3-1.

Weaver’s three goals give a total of 12 on the season, which is a career high and leads the team. Head Coach Todd Shulenberger is proud of Weaver’s performance this season and believes she is one of the top players in the nation.

“She’s a tremendous player, I mean she’s getting it done left and right,” Shulenberger said. “If she isn’t one of the best players in this league you tell me who is, she’s doing a great job for us.”

Finishing conference play with another win added to their record, the Cougars are looking forward to competing in the upcoming NCAA Tournament. WSU will bring the momentum from this rivalry game to practice throughout the next week as they prepare to finish what was started last season.