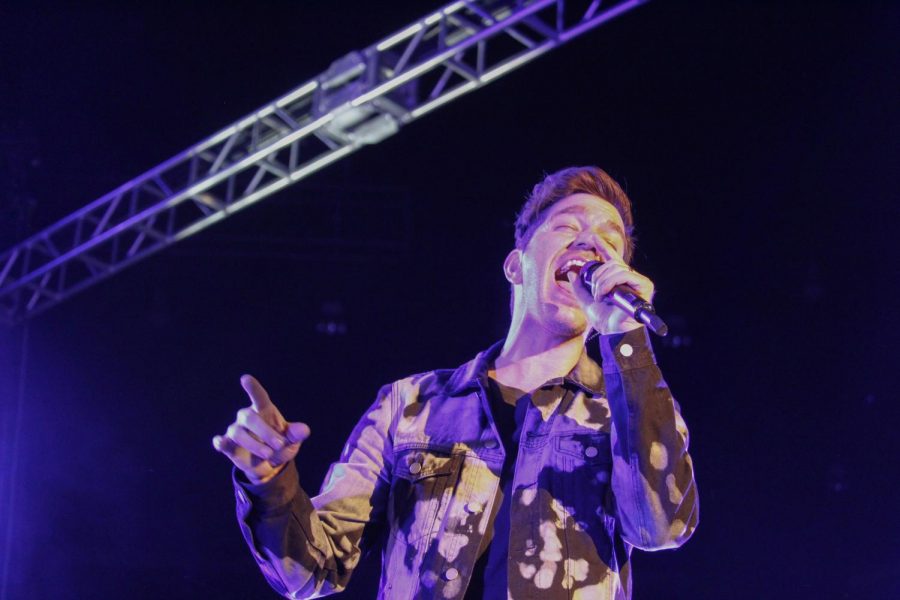 Andy Grammer performs for WSU's Dad's Weekend as an extension of The Good Parts Tour to promote his new album and single “Smoke Clears.”

John Splithoff had a secret to share with WSU on Friday night.

The young artist’s first ever stadium-sized show was in Beasley Coliseum during Dad’s Weekend 2018. If Splithoff was nervous for such a large performance, he didn’t show it.

Though the opener was likely unknown to most of the students and parents in attendance, Splithoff had the crowd singing along for his covers of “What a Wonderful World” and “Take On Me.”

By the time he sang his final song, “Sing to You,” the audience was standing and cheering. Perhaps Splithoff made an impression on the Cougs with his vocals and energy, or perhaps they were just ready for Andy Grammer to make an appearance.

After a brief intermission with a rally of “Go Cougs,” cheers, the lights dimmed.

Then Andy Grammer bounded onto the stage, facing a stadium full of fans. His first song, a high-energy rendition of “Good to Be Alive,” had the fans on their feet, singing and clapping along.

“I’ve been meaning to come up here for a while … I love you so much already,” Grammer said to the audience.

For the Cougs, it was indeed “good to be alive” as Grammer performed numerous familiar songs and a few new ones, never losing the energy he started the show with. Dads in the audience could be seen dancing and singing next to their sons and daughters.

Grammer’s performance featured songs from his latest album “The Good Parts” as well as some of his older music.

He seemed to know about the Cougar spirit and appeared excited to be performing in this community. He responded to every shout of “Go Cougs,” that occurred between songs, encouraging rounds of applause from the audience.

Grammer was aware of the importance of Dad’s Weekend to the WSU community and gave several shout-outs to the fathers in the audience.

“This is pretty awesome,” Grammer said from the stage. “I’ve never really pandered to the dad crowd before but this is fun.”

Grammer himself is the father of a 15-week-old baby girl and drew on his own emotional experience as a parent while performing “Always” and “Spaceship.”

Halfway through the concert, he said he tried to learn the WSU fight song with little success. He passed his microphone to a dad standing in the front row who led the arena in the fight song, making sure Grammer was paying attention as he chanted the lyrics.

Cheering for Grammer turned into cheering for WSU as nearly the entire crowd sang along.

The song everyone was waiting for was the one Grammer saved for last. Knowing the significance of “Back Home” to the WSU community, he made it his grand finale.

As the first few chords were played, people who were still seated rose, preparing to sing loudly to the familiar Cougar football anthem.

Beasley was truly alive as the Cougars in attendance screamed along to “Back Home.” Though the song has been played at WSU since 2015, this year was the first time Grammer visited Pullman.

He showed his affection for WSU when he put on a Cougar football jersey and a WSU flag as he sang the chorus of “Back Home” with the audience one last time.

As fans streamed out of the coliseum, the feeling of happiness was clear from their reactions.

“I thought [the concert] was amazing,” said Mariah Inman, a student who attended the concert with her parents. “[‘Keep Your Head Up’] really uplifted me in middle school so I loved hearing it.”