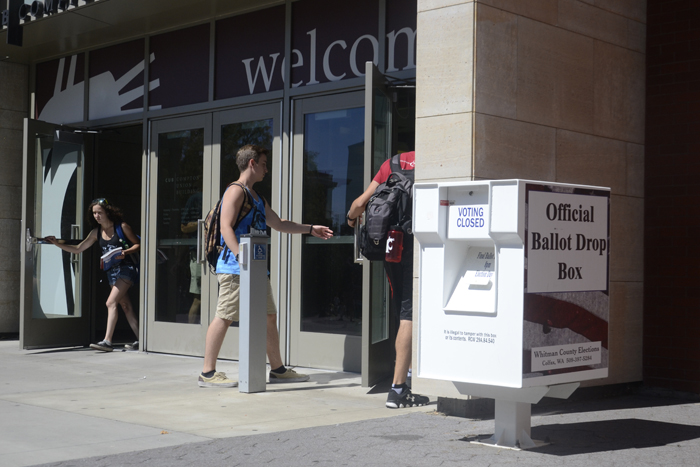 Students walk by the ballot drop box located outside of the CUB.

With Election Day coming up Tuesday, the Washington Secretary of State office has provided a voter tip sheet for voters in the state.

If a Voter’s Pamphlet or ballot has not come in the mail yet, voters can contact the Whitman County elections office to receive another, according to the press release.

Voters’ Pamphlets are also available at vote.wa.gov. There are also translations of the measures and candidates running for election on the site.

In order for votes to count, the ballot return envelope must be signed and dated, according to the press release. Ballots do not need a stamp to mail; however, they must be postmarked no later than Election Day or returned to the drop box by 8 p.m., according to the release.

For those with disabilities, counties are required to have voting units that are accessible at voting centers if someone needs one, according to the release.

The release also warned voters against calls from people saying they can help fill out a ballot. Voters should not let anyone, except trusted family or friends, deliver or mail ballots for them.

MyVote.wa.gov has information regarding where drop box locations are and voters can see their ballot status if it was already mailed. WSU students can drop off ballots in the drop box located outside the CUB entrance.