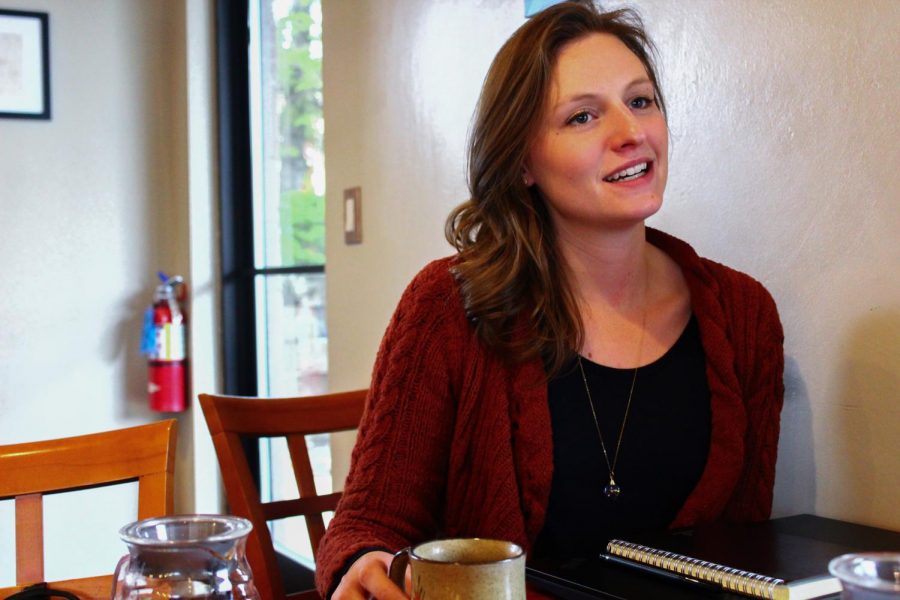 Anna Grindeland, registered dietician and entrepreneur, explains the problems with the diet industry Wednesday at Three Forks Bike and Brew.

Three Forks Nutrition is a name new to the Pullman and Moscow area as the nutrition consultation service first began taking clients a few months ago.

Anna Grindeland said she spent 2018 putting time and effort into building her new business and offering help for anyone concerned with their diet and nutrition. While she doesn’t yet have an office, she has already begun helping clients.

“I am just getting started on this journey myself,” Grindeland said. “I started putting concrete effort into this in January and I am getting all the pieces together to get to where I want to be.”

Prior to this year Grindeland worked at a hospital, using her knowledge to help patients make dietary decisions. She said it was intimidating leaving the safety of her old job and diving headfirst into something new.

Grindeland said she was motivated to finally create her dream business by looking around the Pullman and Moscow community. She said she grew up and went to school in Pullman and even after graduating from the University of Idaho she remains in the Palouse.

“This is a service that’s needed in this community that isn’t being filled,” Grindeland said. “I offer credible, professional advice to folks trying to better their health through nutrition in a one-on-one setting. That is a service that isn’t provided anywhere else in Pullman in this way.”

The Palouse hosts a wealth of gyms and health and wellness areas, but Grindeland said she provides a unique take on improving people’s relationship with their food. She said she is looking forward to dispelling people’s preconceived notions when meeting a nutrition counselor.

Grindeland said mindfulness was the most important thing for people to consider when they are thinking about their nutrition and weight. She said to her, it’s important to take a comprehensive look at a person’s life before offering any advice.

“I start my sessions by asking, ‘How’s it going?’ ” Grindeland said.

These relationships don’t stop with only her clients, however. Grindeland said she has reached out to several businesses to collaborate with them and become known within the community.

Owner Scott McBeath opened his business Three Forks Bike and Brew last month and reached out to Grindeland after realizing how similar the names of their businesses were.

“I emailed her, ‘Look, we both have the same name, we’re after the same kind of crowd, I’d love to meet you,’ ” McBeath said. “Then she walked through the door and introduced herself.”

Grindeland has stopped by Three Forks Bike and Brew numerous times since its opening, McBeath said. He said he is excited about the possibility of working with Grindeland for an event he calls Food for Thought.

“I think we need Food for Thought,” McBeath said. “People come in and learn about food and they meet other people who have the same common interests.”

McBeath and Grindeland may have shared the hardships that come with starting a new business, but both seemed optimistic about each of their futures.

“There is a stereotype when it comes to dieticians and nutritionists,” Grindeland said. “Someone might come to you, sit down and then that dietician and nutritionist would do all the talking, tell you what to eat and then hand you a meal plan.”

Grindeland said she looks at “yo-yo” dieting trends and sees a strong and firm connection to cardiovascular disease and weight gain. Alongside the physical troubles that arise from excessive dieting, she said she also recognizes the negative feelings people can develop towards themselves and their bodies.

Food is complicated, Grindeland said, not just in whether people are hungry but also in which foods are available to them and what culture dictates is acceptable and unacceptable eating. She said she wants to open up a dialogue with her clients and understand their lives instead of providing a one-size-fits-all diet solution.

“I’m a food-forward, anti-diet dietician,” Grindeland said. “The market for fad diets and expensive supplements is a billion-dollar industry and it wouldn’t be if it really worked. If it worked, people would be healthier and keep their money.”

Grindeland said she hopes to continue serving her community with her specialization in nutrition and provide answers to people’s questions about their health.

“Eating at celebration times, eating for sadness, eating for consolation — those all play into our relationship with food,” Grindeland said. “By the time we reach adulthood we already have a lot of those signals between hunger and fullness confused. These are the kinds of things we might talk about in a session.”

Anyone with a nutrition concern can schedule a free 30-minute consultation from Grindeland at threeforksnutrition.com.