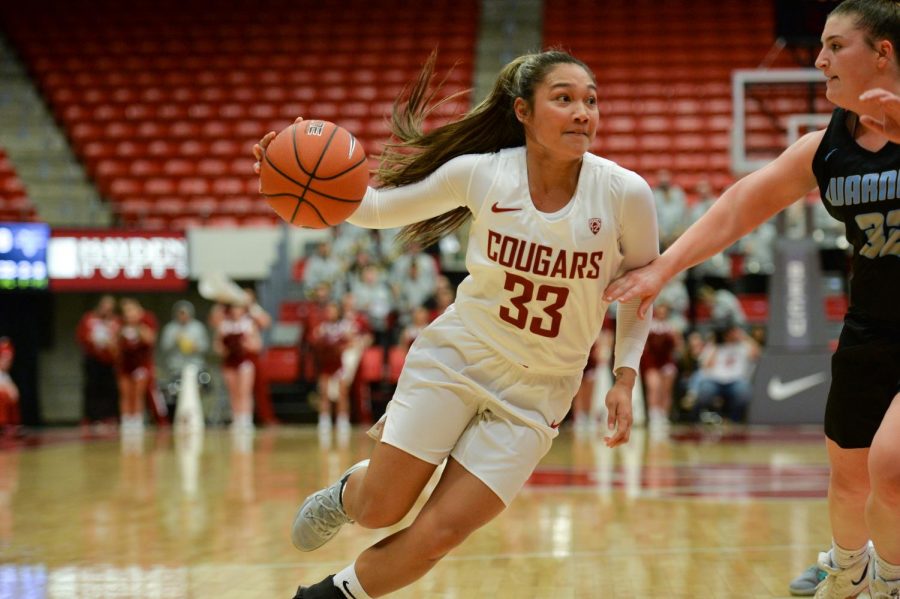 WSU freshman guard Cherilyn Molina dribbles to the hoop against WPU’s sophomore guard Katelyn Rossback in the matchup at Beasley Coliseum on Oct. 29. The Cougars won 106-41 as Molina hit four of her eight field goals and finished with 15 points.

WSU women’s basketball will tip off its season Tuesday when it faces Utah State University at Beasley Coliseum. Coming off a blowout win against Warner Pacific University in their exhibition game on Oct. 29, the Cougars are ready to get back on the court.

Although WSU won by 65 points, Hristova felt the team still needs to focus and improve for the upcoming season.

“I think that we have a lot of things to improve,” Hristova said. “We had like 19 turnovers. Even though we were up by 60 in the end, I don’t think that should happen. That’s a thing we will have to emphasize going forward into the Pac-12.”

Last season, the team had an overall record of 10-20 and a conference record of 3-14. The Cougars lost three seniors from last season, but this year WSU has managed to pick up five freshman and new Head Coach Kamie Ethridge.

Ethridge said she has been impressed with her new team’s work ethic and thinks the Cougars are ready for the upcoming season.

“What has been most impressive to me is the fact that you know we’ve worked with this group for six or seven months now and they’ve been unbelievably hardworking,” Ethridge said. “They really committed this summer to working at the game and working on their individual game, so we have a group that’s hungry to compete at a really high level.”

Last season, Utah State ended with a 7-23 record and had a 1-13 record on the road. In their exhibition game against Westminster University on Friday, the Aggies won 77-56.

With a new team and new coach, the Cougars are ready for the upcoming season.

“This team is highly motivated, very competitive,” Ethridge said. “They want to win, they want to work at the game and do whatever it takes to improve their game and help us have a chance to win.”

The Cougars will tip off against Utah State at 7 p.m. Tuesday in Beasley Coliseum in hopes of picking up their first win of the season.