WSU hosts Montana in first round of NCAA Tournament at home 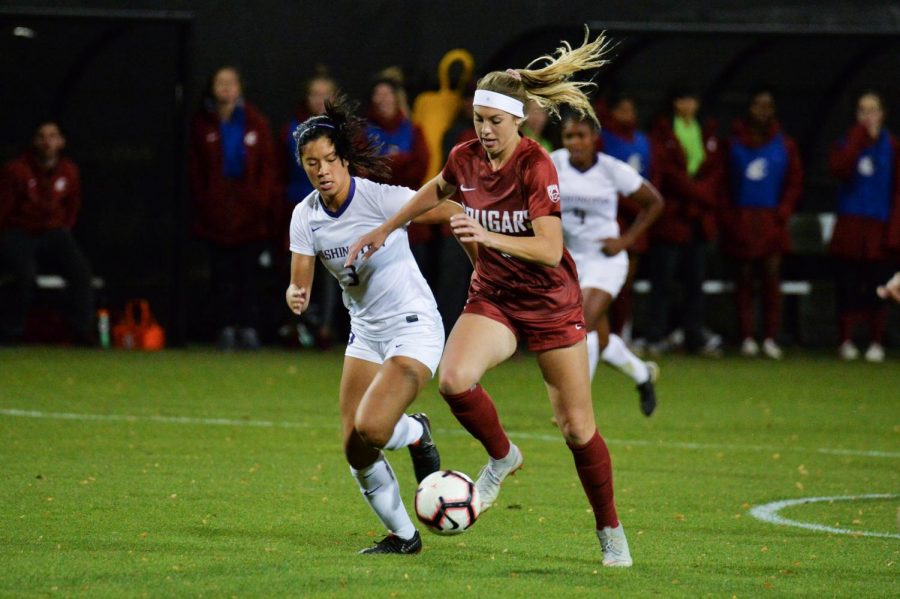 Junior forward Morgan Weaver dribbles the ball downfield as she attempts to keep it away from University of Washington sophomore defender Kaylene Pang on Friday at the Lower Soccer Field.

WSU soccer will host University of Montana on Friday in the first round of the NCAA Tournament. The two teams faced off once before on Sept. 14 in Pullman, where the Cougars won 3-1.

Last season the Cougars made it to the third round, which is the furthest WSU has ever made it in the tournament.

Going into the tournament, Head Coach Todd Shulenberger said despite a rocky season the players have fought hard to make it to where they are.

“It shows the body of work we have done this year, this team deserves that,” Shulenberger said. “We have had a little roller coaster throughout the year, but you’ve got to love their fight all the way to the end. Clearly our last three games have set us up for [the] ability to host the game and get into the tournament.”

This year has been filled with ups and downs for WSU as it was the only remaining undefeated team through 10 games, reaching No. 7 in the rankings until a five-game losing streak sent the Cougars on a downturn.

On top of that, the Cougars have been without starting redshirt senior goalkeeper Ella Dederick after she sustained an injury early in the season. Sophomore forward Elyse Bennett also missed time due to the injury.

Earlier this year when WSU faced Montana at home, sophomore Makamae Gomera-Stevens scored twice to push the Cougars past the Grizzlies, who finished the season 7-8-6 in the Big Sky Conference.

Through ups and downs, junior forward Morgan Weaver has consistently been a leader on the pitch. She has scored 12 goals and has 40 shots on net in 18 games this season. Weaver has three multi-goal games this year, including a hat trick against in-state rival University of Washington on Oct. 2, pushing the Cougars past the Huskies 3-1 to claim the Apple Cup.

Although WSU faced a slump in the middle of the season, it continued to fight and finished its final three games of conference play with two wins and a tie against No. 1 Stanford University.

The Cougars will host Montana in the first round of the NCAA Tournament at 7 p.m. Friday on the Lower Soccer Field.