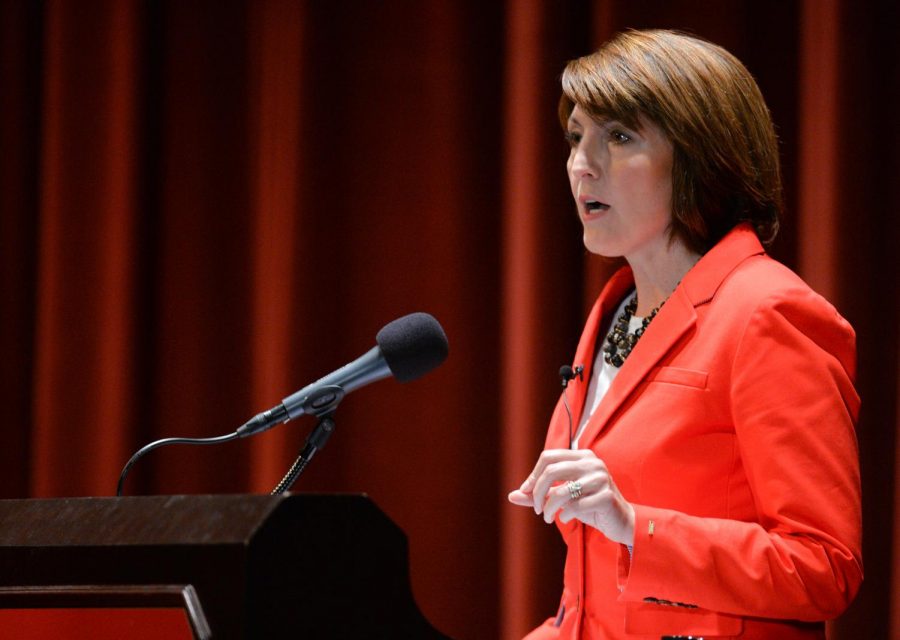 Congresswoman Cathy McMorris Rodgers speaks at a debate hosted by the Foley Institute on Oct. 5, 2016.

Whitman County voted closely with the rest of the district, with 53.63 percent of the first round of ballots going to Rodgers and 46.37 percent going to Brown. The Whitman County Auditor’s Office had 6,449 ballots counted as of Tuesday night with an estimated 6,000 more to be counted in the coming days.

“Thank you for standing alongside me, Brian, our three kids and our wonderful family,” the statement reads. “I am incredibly proud and honored to serve you and I look forward to keeping the momentum going and continuing to work hard to get results for the hardworking men and women in Eastern Washington.”

“I stand before you tonight stronger, better and more convicted in what we are fighting for,” she said.

The congresswoman said she hopes this can begin a healing process in America.

“[I hope] that this can be the beginning of healing,” Rodgers said. “A healing of broken families and broken lives. A healing for our country as each one of us do our part to build those bridges.”

Brown, who resigned as chancellor of WSU Spokane to challenge for the seat, said she ran to bring “an independent voice back for Eastern Washington.”

In her concession speech Tuesday night, Brown expressed thanks for the high level of engagement among voters and said the race showed Eastern Washington values.

“Our campaign communicated what people in Eastern Washington told us they cared about most — health care security for their families, an independent Congress not about party or special interests, but about Eastern Washington working together to get things done and an economy that works for everyone,” Brown said in her speech.

She went on to speak to younger citizens about “American values” and the current political climate.

“[A] final message for our young people: Our country may seem awfully divided right now,” she said, “but you know armed service members have died and risked their lives for our freedoms and that courageous people marched and bravely shared their stories and stood up for themselves so that women could vote, and African-Americans and Native Americans could vote.”

Brown would end her concession speech by calling on people to refuse harmful political rhetoric and thanking those who voted.

“We uphold and defend American values when we refuse to being falsely divided and reject the demonization of our political opponent and realize the hopes and aspirations of our community and our country by voting,” Brown said. “A huge thank you to all who voted.”

Rodgers faced her most tightly contested and most expensive race since she took office in 2005, with almost $10.8 million spent between the two candidates, according to the Federal Election Commission. Rodgers outspent Brown by about $200,000.