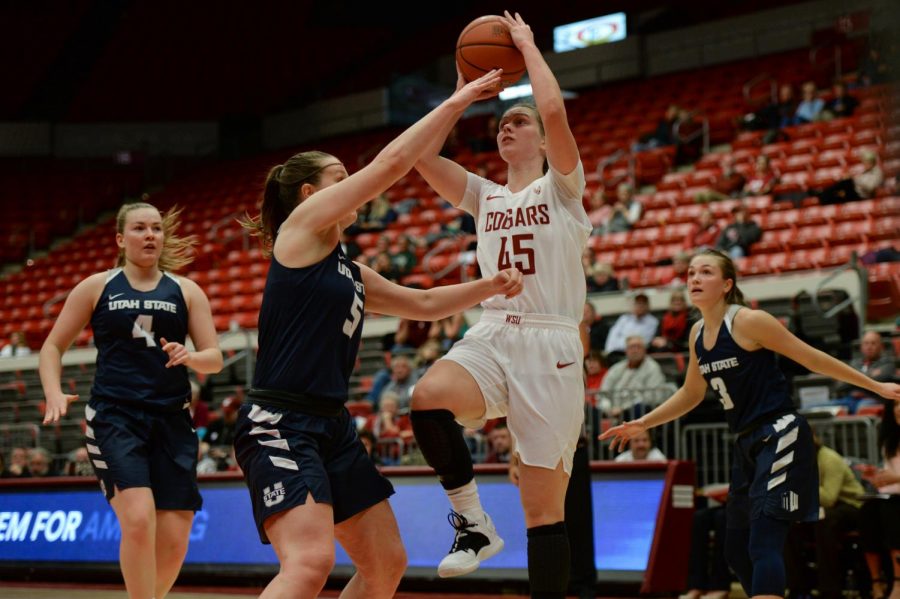 Redshirt junior forward Borislava Hristova charges towards the basket in the Cougars game against Utah State Tuesday in Beasley Coliseum.

WSU women’s basketball opened its season Tuesday night with a 72-61 loss against Utah State University. The game was a tight matchup throughout the 40-minute period, however, mistakes in the fourth quarter cost the Cougars a victory.

Redshirt junior forward Borislava Hristova felt that the team was not ready for the physicality that Utah State brought.

“We knew this team was going to go hard on us, we knew their pressure was going to be key for that team,” Hristova said. “We just didn’t come out as focused and they just outworked us today and I think we just need to take this to heart and it’s not going to get any easier, we’re just going to go to practice … and fix the mistakes we made.”

The second quarter brought much of the same intensity, however, with five minutes left in the half Hristova injured her ankle, leaving the court for the rest of the quarter. With a seven-point lead before Hristova’s injury, the Cougars were able keep their game together to lead 35-32 at the end of the half.

In the fourth quarter, the Cougars maintained their lead until their shots being put up would not fall, giving the Aggies the opportunity to go on a run and win 72-61. In the final quarter, WSU’s field goal percentage was only 33.3 percent compared to Utah State’s 60 percent.

Head Coach Kamie Ethridge felt that her team did not get into a rhythm which caused the Cougars to fall short in the fourth quarter.

“I think by the end we were just barely standing, we just never regrouped, we never got into our system very well,” Ethridge said. “It finally caught up with us in the fourth quarter where we really took some bad shots and hard shots and on the other hand, they were making big play after big play.”

WSU struggled with turnovers this game as they turned the ball over 20 times compared to the Aggies 10. These 20 turnovers resulted in 23 points for Utah State while the Cougars only scored 11 points off of turnovers.

Hristova lead the team with 27 points, seven rebounds and two steals. Freshman forward Ula Motuga added 15 points in her first collegiate game. Prior to the matchup, Motuga was gone for 10 days as she was playing basketball in India.

Motuga said she felt the offense struggled because she was away from the team.

“I’ll definitely take this loss on my back,” she said. “My absence probably didn’t prepare us the way that we should have been prepared. Coming back 50 hours later and expecting myself to be able to click with my teammates automatically was definitely tough on my part.”

The Cougars will be back on their home court 1 p.m. Sunday when they face Saint Mary’s College of California at Beasley Coliseum in their second game of the season.