Stepping out of comfort zone leads to release

Poetry slam highlighted importance of performing, how it serves as means to vent, discuss passions 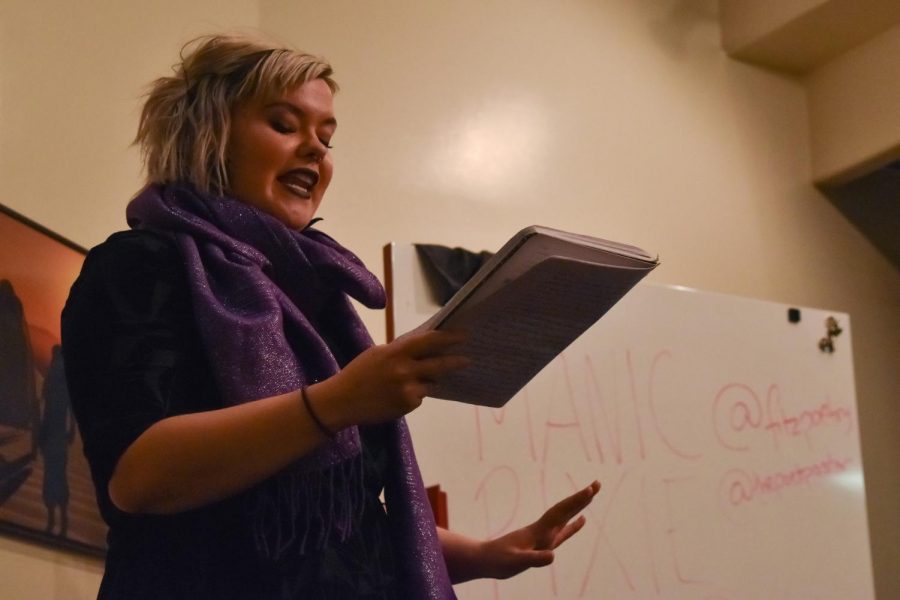 Fitz Fitzpatrick from Magic Pixie Jesus Witch presents their poems to the audience Friday in the Bundy Reading Room.

Throughout the Palouse Poetry Slam open-mic on Friday snaps echoed, which mingled with the poet’s voice and occasional click of a camera shutter. It created a peaceful and welcoming environment, both for the performer and the audience.

With the audience and poetry-readers located in the same space, the open-mic had an intimate environment. There was a total of six performers, including Fitz Fitzpatrick and Danielle Estelle Ramsay, also known as the duo Manic Pixie Jesus Witch.

The poems featured topics from the poets’ shared passion of writing to personal issues they deal with in their lives, such as being LGBTQ+.

Misty Shipman-Ellingburg, the organizer of the event, opened for the featured poets. Shipman-Ellingburg performed two poems, the first titled “An Ode to Tanya Harding” and the second called “A Message to the Boy Who Sexually Assaulted Me When I Was 18 and Tried to Friend Me on Facebook.”

When performing poetry she has cultivated, Shipman-Ellingburg said she feels like she is being her most authentic self.

“It’s almost like when I’m performing, I stop performing,” she said. “I’m just me.”

She said poetry has the potential to make creators feel like whole people and unites people regardless of their beliefs.

After Shipman-Ellingburg, Manic Pixie Jesus Witch performed a total of eight poems. They opened and closed with group poems. The first poem was about addiction and the other was a poem about how, despite the duo’s different religions, they remain similar in many ways.

When people begin doing spoken word poetry, it is important to take every opportunity to get in front of people and gain experience being comfortable in front of an audience, Ramsay said.

Fitzpatrick said that knowing at least one person in the room needs to hear what they’re saying gives them the strength to be vulnerable. The more they do it, the easier it is.

“My advice is vulnerability,” they said. “Write what scares you and be willing to share that with other human beings.”

Writing poetry allows the performer to become empowered and potentially cope with past experiences, they said, and this can serve as an emotional outlet. Additionally, they said those who observe these performances can be positively affected by what is being said.

Ramsay said slam poetry allows her to be herself and communicate things of value she cares about.

For Fitzpatrick, poetry is a way for them to “exorcise” their own demons and connect with people who face similar things, they said.

“It’s that experience of ‘I see you’ that makes this art form truly healing,” they said.