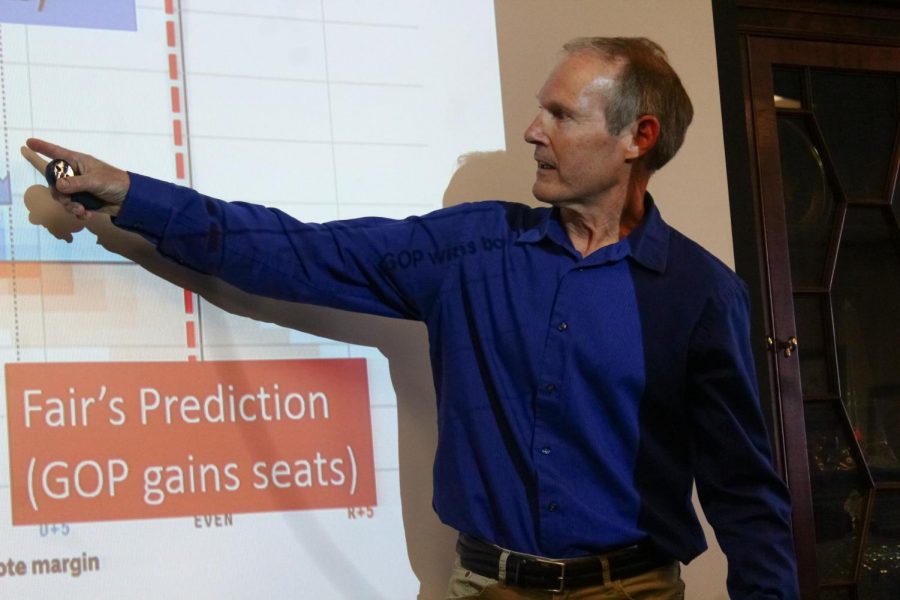 John Wilkerson, a professor of political science at the University of Washington, speaks about the results of the election at the Coffee and Politics in the Foley Speaker's Room on Wednesday afternoon.

At a three-person panel Wednesday, speakers discussed the early results of Tuesday’s midterm election and political shifts seen since the 2016 general election.

President Donald Trump had a large role in this year’s midterms, said John Wilkerson, University of Washington political science professor. Based on Trump’s approval rating, he said it was expected the Republican Party would lose more congressional seats than it actually did.

Wilkerson said because of the public’s discontent with the president, people who have not previously been involved with politics are now voting and running for political office.

“This election really was a referendum on Donald Trump,” he said.

Historically, it is common during midterm elections for the president’s political party to lose congressional power, he said.

The loss could have been by a far larger margin, Wilkerson said, but it was also affected by the hearing for Supreme Court justice nominee Brett Kavanaugh and the campaigning Trump did for Republican candidates.

“When Trump went out [and] became extremely controversial,” Wilkerson said, “it really made a positive impact for the Republican Party.”

Mark Stephan, associate professor at WSU Vancouver, said the midterms were affected by redistricting because the redrawing of districts allows for them to be more representative of the state.

Democratic Pennsylvanian candidates won three congressional seats, he said. This is significant because the state’s court recently redrew its district lines after ruling that its Republican representatives were guilty of gerrymandering, he said.

Some states that voted red in the 2016 elections have become more Democratic, Stephan said. This shift has led to states being split by a near-equal amount of both red and blue voting districts.

“A lot of states are really purple,” Stephan said. “Today they are a lot less purple than they were yesterday.”

“[There are] huge implications for redistricting,” Ridout said.

This year’s prediction polls were reasonably accurate, he said. Most institutions were reported a loss of Republican seats in the House and the continuation of a Senate Republican majority, he said. What was surprising, he said, is the gender gap among the two parties in the House.

“The demographic divide between parties is getting wider,” Ridout said. “[There are] at least 84 Democratic women in the House and 12 Republican women in the house.”

These midterms have shown that some states such as Texas, Nevada, Colorado and Indiana have become more purple, Wilkerson said. In those states, Democratic candidates such as Beto O’Rourke made large efforts to mobilize voters and register newly eligible voters, he said.

“[Democrats were] changing the dynamic of politics in Texas,” Wilkerson said. “That momentum will carry over into the next election as well.”

“I heard Washington state had a 70 percent [voter turnout],” he said. “If that’s the case then that is impressive.”

Some predictions of voter turnout estimated the state could reach over 70 percent voter turnout, which could surpass the 1970 record of about 72 percent.

More information of the midterm’s national effect will be available in three months’ time as the results are still coming in, Stephan said.

It has becomes clear that with the influx of voter turnout nationwide and the increasing issue of polarization, it is too soon to predict the next election in 2020, he said.