Cougars down Bruins for second time this season 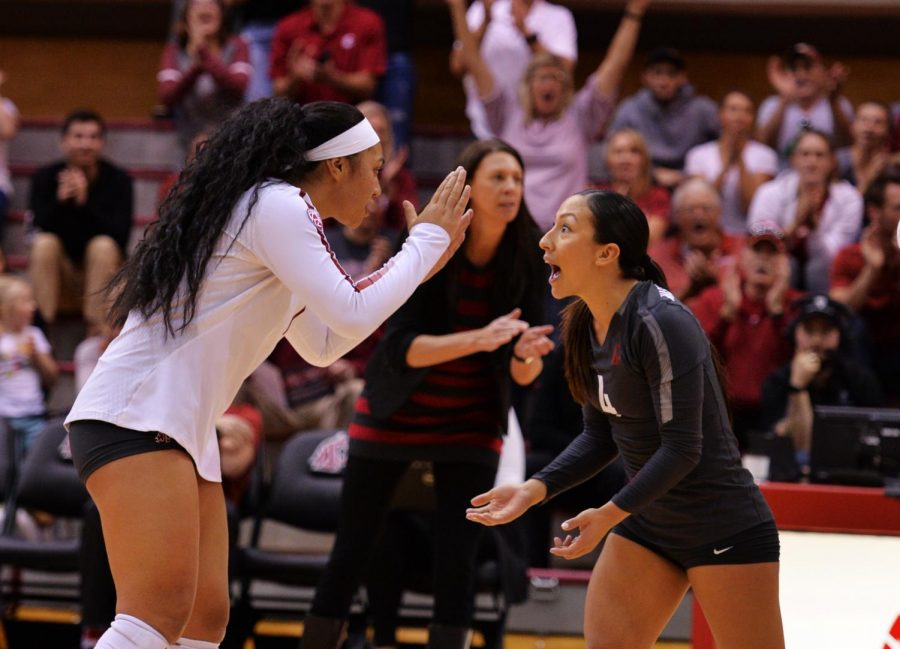 Sophomore outside hitter Penny Tusa, left, and junior libero Alexis Dirige high-five one another after a successful rally in the game against University of California, Los Angeles, on Oct. 21 in Bohler Gym.

For the second time this season, No. 19 WSU volleyball defeated No. 21 University of California, Los Angeles, in four sets Thursday night in Los Angeles.

Despite a 3-1 final score, the match wasn’t as one-sided until the very end. In the first set, the teams went back and forth and WSU only had two 3-0 scoring runs leading up to a Bruins’ downfall near the end. UCLA was up 17-15 until the Cougars battled back to earn a 25-19 set win for WSU.

Rolling into the second set the Cougars showed the same confidence, but the Bruins fought back. At the end of the set, UCLA went on a 7-1 scoring run to break WSU’s stride. Trying to hold their set together, the Cougars went back and forth with the Bruins before ultimately losing 29-27.

Early in the third set UCLA seemed in control and went on a 6-0 scoring run to give them a 13-8 lead over the Cougars. WSU fired back, going on an 11-3 scoring run and bringing the team to a 20-17 lead.

But multiple kills from UCLA players brought the Bruins even with the Cougars at 25 all. WSU was able to finish off the set by a final score of 28-26 with kills from senior outside hitter Taylor Mims and sophomore outside hitter Penny Tusa.

The Bruins fought to stay alive in the fourth set but came up short as the Cougars took a 25-21 win to finish out the match. Senior outside hitter McKenna Woodford led the Cougars with 15 kills, and added 10 digs and two blocks. Tusa and Mims each had 14 kills in the match and Tusa also picked up 16 digs.

WSU’s next game is another California rematch, but this time it’s against No. 13 University of Southern California. The match will start at 1:30 p.m. Sunday at the Galen Center in Los Angeles.