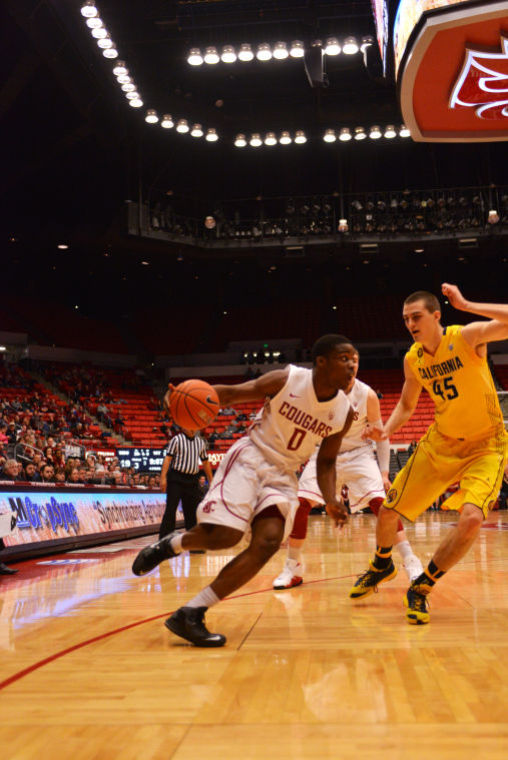 Ike Iroegbu drives the ball during a game against Cal, Feb. 12.

After suffering another tough loss, WSU men’s basketball Head Coach Ken Bone and his players can’t keep their heads down as they must focus on their upcoming game at home against the Stanford Cardinal at 4 p.m. tomorrow.

“That’s all we talked about in the locker room after the game,” Bone said in a press conference after suffering an overtime loss to California Wednesday night. “We’ve got to put this one behind us, and we don’t have a week to sit on (the loss)”

Here are two key areas the Cougars must execute in order to dig themselves out of the current hole they are in and achieve the win against Stanford tomorrow.

Contain the big men of Stanford

When the Cougars traveled to Stanford early during the season, they were outmatched by the Stanford big men. WSU allowed Stanford senior forwards Dwight Powell and Josh Huestis to each score in double digits. Huestis is currently averaging 11 points per game, and Powell is averaging 15.3 points a game.

“We play a team defense where our team defense is predicated on using our strengths, you know to kind of counter out some of their strengths,” WSU sophomore forward Junior Longrus said. “So I think if we play as a team, work early as a team, then we’ll be able to guard anybody.”

The Cougars were outscored by 22 points in the paint in their last game against California. It’s simple, cover up the paint and the chances of winning will increase for the WSU men’s basketball team.

WSU junior guard DaVonte Lacy has been playing on another level since he returned from his injury. He averaged 26 points from the last four games he played since missing the first four weeks of Pac-12 play.

Lacy single-handily helped the Cougars comeback against California on Wednesday by scoring 26 points in the second half and finishing the game with a career-high 39 points.

“My teammates did a great job of finding me, putting the ball on time,” Lacy said after the game against California.

Lacy’s teammates will again need to provide the same opportunities for their captain that they did on Wednesday.

By giving the ball to Lacy more, opponents will start to key in on the Cougar co-captain, which will leave players like redshirt senior forward D.J. Shelton and redshirt freshman guard Que Johnson open for more opportunities to score.

“It really helps (when he’s scoring) because the focus is on DaVonte and it free things up for other guys,” Bone said.

The last time the Cougars played Stanford was on Jan. 15, when they fell to the Cardinal by a score of 48-80.