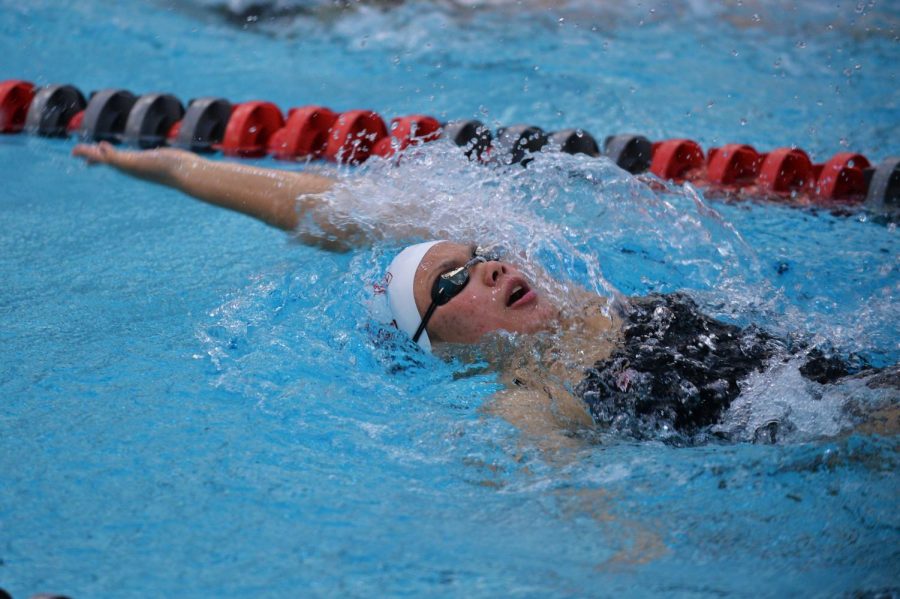 Freshman backstroke and butterfly swimmer Sophia Balmaceda races in the women's 200 backstroke against University of Wyoming on Friday at Gibb Pool.

It had been 25 years since the WSU and University of Wyoming swim teams faced off when they met Friday night in Gibb Pool, with the Cougars holding a 3-0 all-time advantage against the Cowgirls.

However, WSU got off to a rocky start, winning just one of the first four events. This created a large gap that proved to be too hard to close as the team fell to Wyoming 140-122.

Despite the loss, it was a record night for WSU as eleven Cougars posted season-best times. WSU Head Coach Matt Leach said he was proud of his team’s performance.

“You know we got off to a rough start and that was frustrating,” Leach said. “However, these girls really picked it up and performed great in the majority of our events so I’m proud of them for that and we’ll look to carry that momentum heading into Houston next week.”

Freshman Keiana Fountaine extended her tremendous first-year campaign as she won three of her four events. Though she struggled in the 100-yard butterfly, Fountaine continued to be a threat in 200-yard freestyle where she finished first at almost three seconds better than her opponent at 1:49.27.

Junior Ryan Falk and sophomore Taylor McCoy also had phenomenal performances as Falk took second place in the 1,000-yard freestyle with a time of 10:17.55 and first in the 500-yard freestyle at 5:03.28.

McCoy had some tough competition in the 200-yard backstroke in a nail-biting race where she took first place by less than two-tenths of a second. She also won the 200-yard individual medley, beating fellow Cougar sophomore MacKenzie Duarte by two seconds.

Despite two recent losses, Leach said he thinks it is great WSU has faced some incredibly tough schools to help the team improve as swimmers and give them an edge heading into the Phil Hansel Invitational on Friday.

The Cougars will compete Friday through Sunday at the Phil Hansel Invitational in Houston, Texas, which will be their last meet before opening up conference competition in January. The team will not return to Gibb Pool until the Feb. 16 meet against University of Utah.