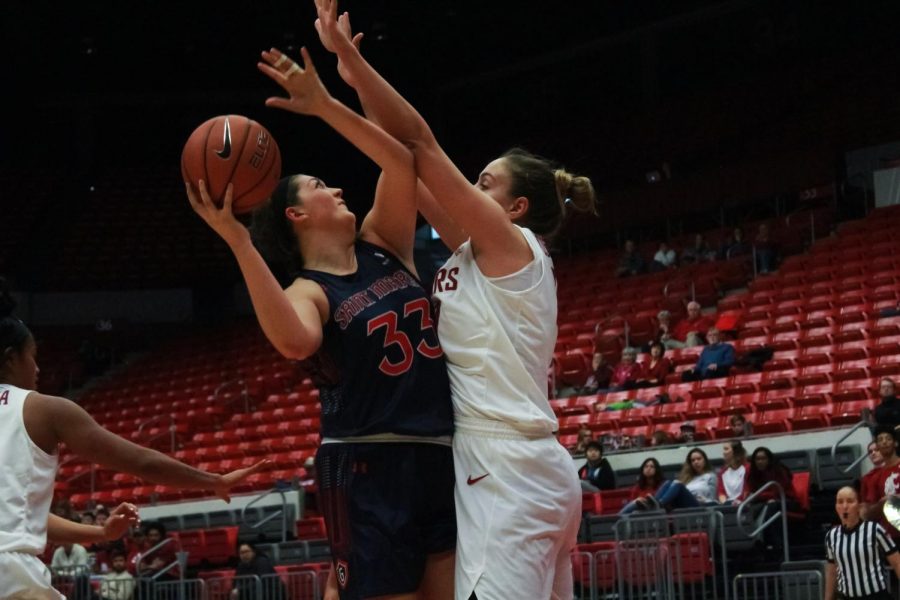 Despite the loss, Head Coach Kamie Ethridge said she feels more encouraged after the game by the effort of the Cougars (0-2)ain.

“I just liked how our team competed,” Ethridge said. “I know we didn’t get the win but I thought the improvement that we had from Monday night to tonight was unbelievably … good.”

The Gaels (2-0) led most of the first quarter but the Cougars found their shots and the score was 17-17 at the end of the first 10 minutes. In the second quarter, the Gaels would score first but a three pointer from senior guard Alexys Swedlund put the Cougars up 20-18.

The Gaels would not be deterred and they kept up with the Cougars and reestablished their lead and finished the first half leading 35-31.

The Gaels would start the third quarter scoring nine points before the Cougars answered with a basket from freshman forward Shir Levy to make the score 40-33 with 8:21 left in the third. The Cougars would get their longest scoring streak of eight points as the end of the third quarter approached.

In the fourth quarter with just over four minutes remaining Swedlund made a historic three-point shot to become the Cougars all-time three point leader with 162 baskets.

Swedlund said she was focused on the game, not records when she was playing.

“I didn’t even realize that happen,” Swedlund said. “I’m really thankful and obviously I wouldn’t have done it without the assists my teammates have gotten me.”

With under two minutes remaining in the game, senior center Maria Kostourkova would make two key baskets to get the Cougars within two points. WSU trailed 66-64.

With 31 seconds left, Swedlund missed a three point shot that would have given the Cougars the lead. After several other missed opportunities, the Cougars lost to the Gaels.

Ethridge called the defeat a bump in the road.

“Anything that this team wants for the future is still available to us,” Ethridge said. “This is a marathon. I believe in these kids.”

WSU returns to the court 5:30 p.m. Friday to face University of Nebraska at Beasley Coliseum in hopes of winning its first game of the season.