Events are a chance to learn about, celebrate indigenous history 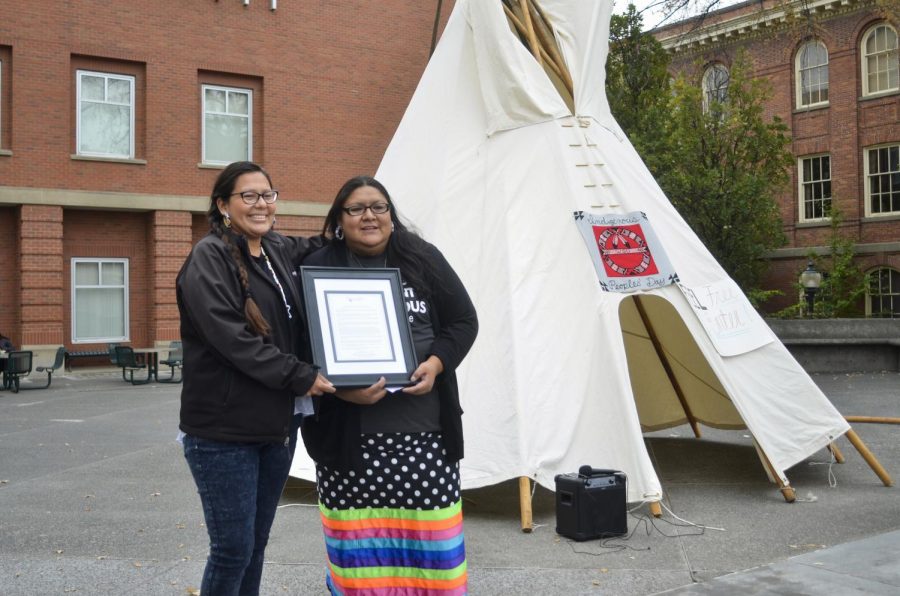 From left: Tipiziwin Tolman, teacher at Lakhol’iyapi Wahohpi, poses with Ku-Ah-Mah Co-chair Chantel Hill, in front of a tipi in celebration of Indigenous People’s Day on Oct. 8.

Edwards said this month is a special time to recognize Native American history and she is glad to see more recognition each year toward indigenous people.

“This month-long holiday is a chance to celebrate Native history, our diversity, the many cultures [and] traditions and give us the opportunity to come together as Natives and non-Natives all driven toward a single purpose,” she said.

“I think many of the student groups like [the Native American Women’s Association], Ku-Ah-Mah and our program have done a tremendous job creating purposeful programming to bring everyone together,” she said. “It’s great to see that happening on campus.”

WSU itself makes a significant effort to stay involved and get these celebrations recognized, Edwards said. Those efforts included a letter from President Kirk Schulz recognizing National Native American Heritage month on the WSU website.

“Earlier this month [Schulz] reiterated and sent a message around campus that this month is a time to celebrate our heritage,” she said, “which is such a cool thing to see and really showed us how much WSU truly cares about our events.”

Edwards said creating programming for the WSU community throughout the month and giving diverse groups of people the chance to learn and make new friends is one of her favorite jobs.

“I want to get Natives and non-Natives together,” she said. “Learn something new about American Indians, but also to have fun and demonstrate that we’re a very welcoming environment.”

Edwards said plans are still in the works, but the NAWA and Ku-Ah-Mah student groups and the WSU Native American Student Center will update events on their Facebook pages and other social media throughout the month.