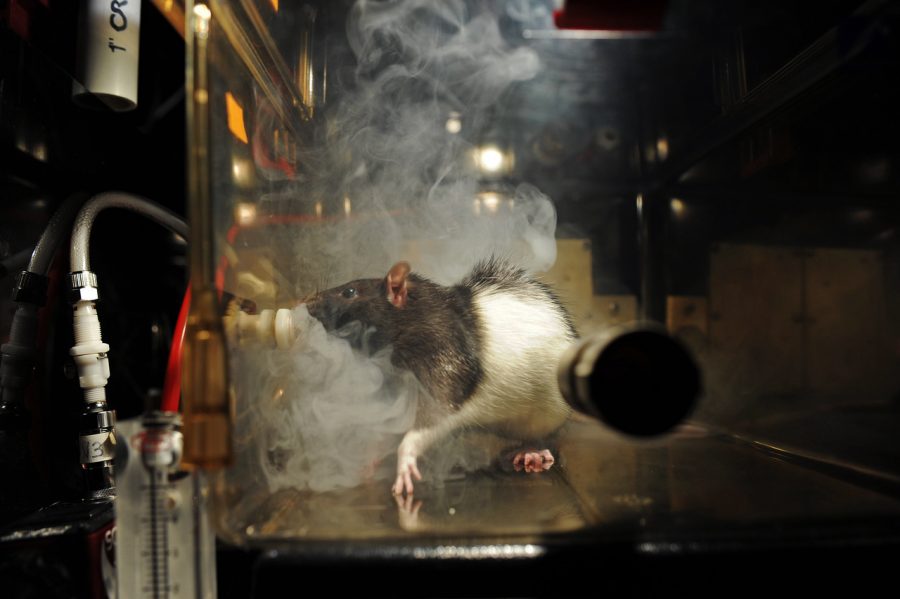 Pregnant rats were exposed to cannabis vapors twice a day, and their offspring were tested pulling levers with a reward. Researchers found rats whose mothers were exposed had more trouble completing tasks when rules changed.

Assistant Professor Ryan McLaughlin started to examine the effects of marijuana on the brain and behavior of rats whose mothers were exposed to cannabis at WSU a little over a year ago.

“We are trying to look at research questions people are most interested in,” McLaughlin said. “Now that we have legal marijuana in Washington state, one of those questions [is] ‘What are the long-term effects of exposure to cannabis?’ ”

The two vapor groups were placed in a chamber that used a vaporizer similar to commercial electronic cigarettes, he said.

To approximate the regular usage of cannabis in the human population, researchers used vapor twice a day to simulate the effects of smoking, McLaughlin said.

“This question has been difficult to tackle in human studies because longitudinal studies need 15 to 20 years to follow individuals and determine what the long-term effects are going to be,” he said.

After the rat pups were born, the researchers allowed 70 days for the offspring to reach maturity. Then the rats were placed in chambers that included two levers and a light signaling which lever the rat should select. The reward for pushing the correct lever was a sugar treat, McLaughlin said.

“In respect to the effects of cannabis, we did not see any deficits of learning this task,” McLaughlin said. “Where we did see deficits is called the second stage, strategy shift component.”

Put simply, the rodents exposed to cannabis in the utero had more trouble consistently performing the lever task when the rules changed.

After the rodents selected the correct lever 10 times in a row, the researchers switched the task to only pushing the left lever to examine how long it takes the models to adapt, he said.

The last stage was to only press the right lever. The data showed that the rats exposed to the highest level of cannabis vapor made significantly more errors on shifting tasks and showed a deficit of flexibility, McLaughlin said.

“When we look at the amount of errors, we’re not seeing the exposed rats only resorting to the cue-based strategy, they are fine with leaving that,” he said. “What seems to be the issue is where the rat makes four or five correct but then they resort back to the old strategy or try something novel.”

McLaughlin said there are long-term cognitive effects of marijuana use during pregnancy researchers do not fully understand yet.

“This data is preliminary, we have to continue to run more cohorts of animals,” he said.

Hayden Wright, a graduate student at WSU, helped conduct the research and presented the group’s findings at the annual Society for Neuroscience conference on Nov. 4.

“The conference went really well,” he said. “There was a lot of interest in the work.”

Wright was responsible for care of the rats that included making sure they were fed and watered. He said he also delivered the cannabis vapor to the mother rats.

Most animal studies use injections of tetrahydrocannabinol, more commonly known as THC, which is the compound associated with cannabis-related highs. However, this study used raw cannabis extract instead, McLaughlin said.

“We want to look at the effects of the whole plant of cannabis, particularly during the prenatal stage,” he said.

Even though little is known about the potential harm of cannabis exposure during pregnancy, legalization has reduced public concern over cannabis use and its possible health effects, McLaughlin said.

“There is a reduction of the perceived harms of using cannabis and in the social stigma of using it during sensitive developmental stages,” he said.

Part of the funding for McLaughlin and his research team came from the Alcohol and Drug Abuse program through the use of excise tax dollars from cannabis sales which the state allocated to fund drug research programs at WSU, McLaughlin said.

Researchers who work with cannabis must follow strict regulations because marijuana is not legal federally, McLaughlin said. They must apply for use of the drug and obtain it from the University of Mississippi, the only approved cannabis source by the Drug Enforcement Administration.