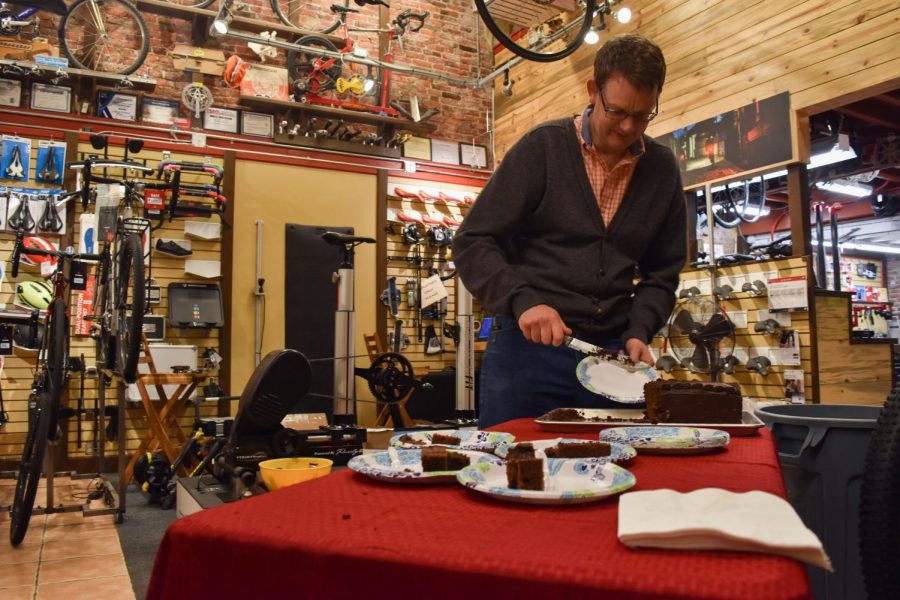 Participating businesses such as Pups and Cups Cafe, Sam Dial Jewelers and Neill’s Flowers all offered chocolates or other confections during the one-day event.

Brice Erickson has owned B&L Bicycles for 22 years and said his wife has baked a cake for every Chocolate Decadence since the event began. He said he thinks the event is positive for the Pullman community from a business and consumer perspective.

“It helps out everyone,” Erickson said. “It gets more people out downtown looking around and gives them ideas of things they might want.”

Erickson said his customers liked the chocolate cake — one even brought a Tupperware container to fill with it. Thankfully for the people who would arrive to B&L later in the evening, there was plenty of cake for everyone.

Since he’s lived in the Pullman area for over two decades, Erickson said he has seen the area go through some down times but thinks Pullman is now on an upswing. He noticed the Chocolate Decadence event grew in size this year.

“When you say Chocolate Decadence, people don’t know what it is,” Erickson said. “If they’ve come down a time or two, they do.”

One unfamiliar with the traditional event was WSU graduate student Wei Ching Liao. She said she learned about the event through Facebook and assumed it would all take place in the Pullman Chamber of Commerce building.

She soon found out that in order to get the chocolate she was promised, she would have to go building to building in the 30 degree weather.

“I was surprised,” Liao said. “It was really cold outside, but I thought it would still be fun to explore downtown Pullman.”

In addition to the treats, at each location participants could pick up a bingo sheet of the different businesses and could enter to win prizes if they visited particular places. Liao began her journey with hot chocolate from Umpqua Bank.

“I didn’t know what I’d get,” Liao said. “When I got the hot chocolate, it made me keep going to more places. I see myself as a foreigner and a traveler and I enjoy seeing places.”

Liao said she moved to the U.S. last year from Taiwan to study sport management. Although she already saw a lot of downtown Pullman during her first year in America, the event pushed her to visit places she had never been before.

She visited businesses like the Harvest Baptist Church, which gave away punch and chocolate-dipped pretzels. She said her favorite treat was Palouse Country Candy’s dinner mints they sampled during the event.

Liao said the event was positive overall but she noticed some businesses put more care and attention into the event than others. The owners of B&L Bicycles went through the trouble of baking their own cake, while other places only had a cup of Hershey’s kisses out.

She also mentioned how the bingo sheets were laid out in an inconvenient way, with people needing to walk very long distances in order to make a line or column.

“I think they purposely arrange what they put on,” Liao said. “People can’t just walk downtown, they have to drive too. It isn’t easy getting all the lines and make bingos but I think that’s the main goal. They want us to visit more places.”

As the night went on and the event wound down, Liao stopped by B&L Bicycles and said she was impressed with the amount of equipment they had. What seemed at first to be an unassuming bicycle store to Liao also had a fitness studio in the back.

Erickson said it was reactions like Liao’s that keep him putting out chocolate cake every year and participating in the Chocolate Decadence event.

“It’s just a really good event,” Erickson said. “It’s been around for a long time and it draws people downtown, gives them another reason to come down, you know? Come down and get some chocolate.”