Senior leads Cougars after nearly leaving for NBA this offseason 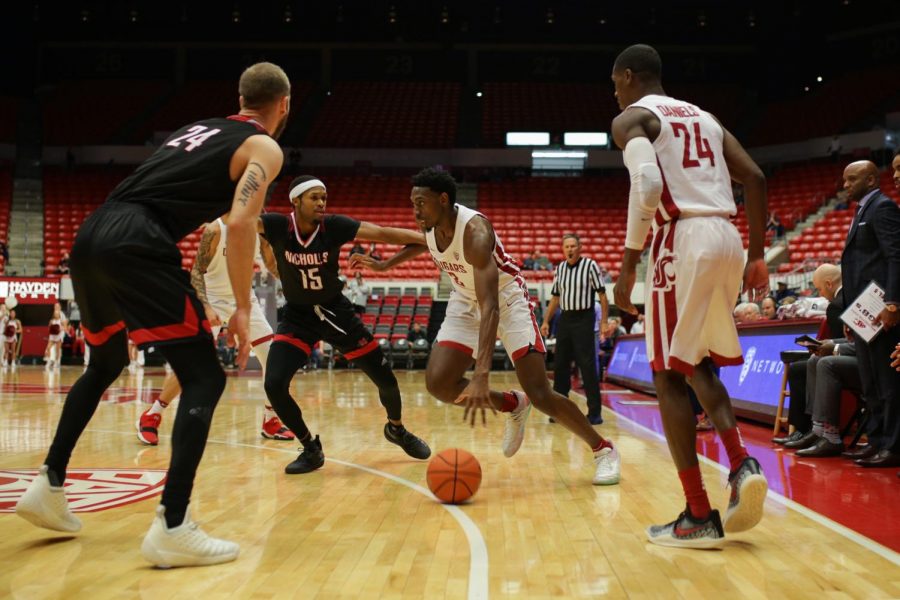 Senior forward Robert Franks Jr., second from right, drives for a layup during the game against Nicholls State University on Nov. 11 in Beasley Coliseum. Franks led the team in scoring Wednesday night against Idaho with 22 points, followed by freshman forward CJ Elleby with 20.

This week’s Evergreen Athlete of the Week is senior forward Robert Franks Jr. Franks scored 31 points in 34 minutes of play in an 89-72 victory over Nicholls State University on Sunday.

Despite his big night, Franks was humble postgame, preaching improvements that must be made despite a 17-point win.

“I just give high praise to my teammates … they stayed in my ear, they stayed aggressive as well,” Franks said. “It was a terrible night for us as a team and individually at the free throw line which we’ve got to work on.”

Franks led his team Sunday night as he made 12 out of 19 shots resulting in a .632 field goal percentage. Franks also went 3-6 from behind the three-point line and started the season with a 31-point and 11 rebound performance.

Franks almost did not return to WSU for his senior year as he tested the waters last offseason by declaring for the 2018 NBA Draft. He was able to maintain his college eligibility while gauging NBA team’s interest in him due to a NCAA rule. Ultimately, he decided to return for his senior season and the Cougars are lucky he did.

In his junior season, he was named the Pac-12 Most Improved Player of the Year. He also had the fourth-highest all-time single season scoring output with 521 points, three spots behind Klay Thompson’s 733 points during the 2010-11 season.

In his senior year, Franks is the highest-profile returning letter-winner from last season after multiple departures and he will be one of the team’s biggest offensive threats this year. He is currently 236 points away from being the Cougars’ 12th player ever to reach 1,000 points in his career.

Franks’ next opportunity to take the court is Wednesday against Seattle University.