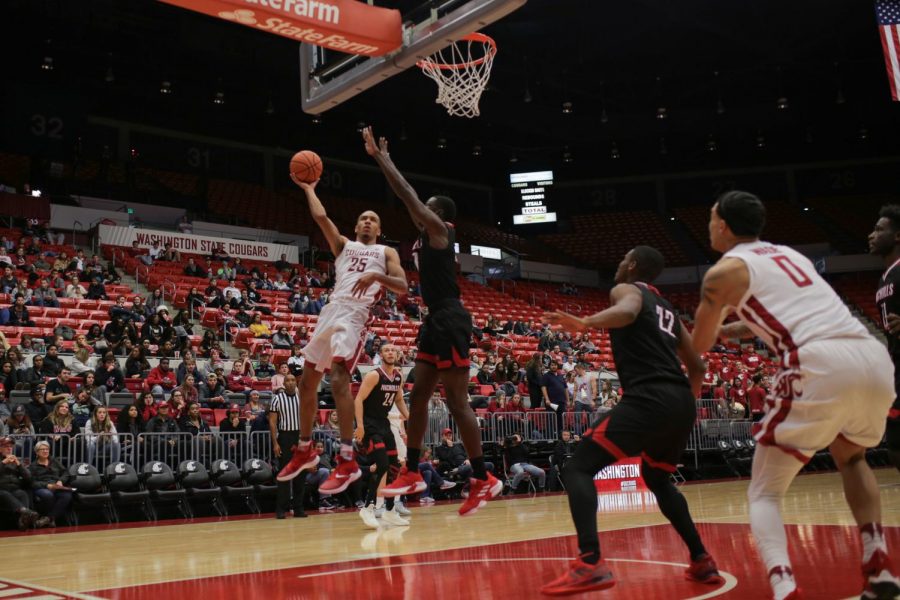 Redshirt sophomore forward Arinze Chidom attempts a layup during the game against Nicholls State University on Sunday in Beasley Coliseum. Arinze made five out of 10 attempts in the game resulting in 10 points for the night.

After the first regular season game brought WSU men’s basketball a victory at home, the Cougars will now board the buses and hit the road for the first time this season against Seattle University on Wednesday.

In the game against Nicholls State (1-2) University on Sunday, the Colonels were able to keep the Cougars within striking distance until the second half when WSU (1-0) pulled away for an 89-72 win.

WSU redshirt sophomore Arinze Chidom finished with 10 points, five rebounds and three assists while freshman forward CJ Elleby made his debut with the Cougars and ended with 12 points, eight assists and three rebounds. Leading the charge in the game was senior forward Robert Franks Jr. with 31 points, 11 rebounds and two assists.

“A win’s a win,” Franks said after the game against Nicholls State. “We did some good things and we also did some things we need to work on.”

Last season, the Cougars defeated Seattle University 75-59 with a couple of key players for WSU returning for this season’s matchup.

Then-sophomore guard Carter Skaggs boasted a career-high in the matchup last season, scoring 26 points against the Redhawks in the second half alone as he drained seven three-pointers. Alongside him was then-junior guard Viont’e Daniels who put up an additional 17 points in that game.

Seattle’s then-sophomore guard Morgan Means, who dropped 12 points in last year’s game, will also be returning of this season’s matchup. The Redhawks (2-1) last took the court Sunday against the visiting Bryant University which resulted in an 82-59 Seattle victory.

The Redhawks one loss this year came in an season-opening 96-74 defeat to Stanford University.

Redshirt junior forward Myles Carter leads the Redhawks in scoring with 54 total points and has turned the ball over 13 times this season. Means is also having a good start this season with 41 points, 21 rebounds and 12 assists.

After a successful first game at home, Head Coach Ernie Kent is ready for WSU to play on the road.

“The next order of business for us is to take this show on the road,” Kent said. “Hopefully people come out and watch us and see how they handle themselves. Teams usually come together on the road so I’m looking forward to it.”

The Cougars will tip off against the Redhawks at 7 p.m. Wednesday in Kent, Washington, for their first away game of the season.