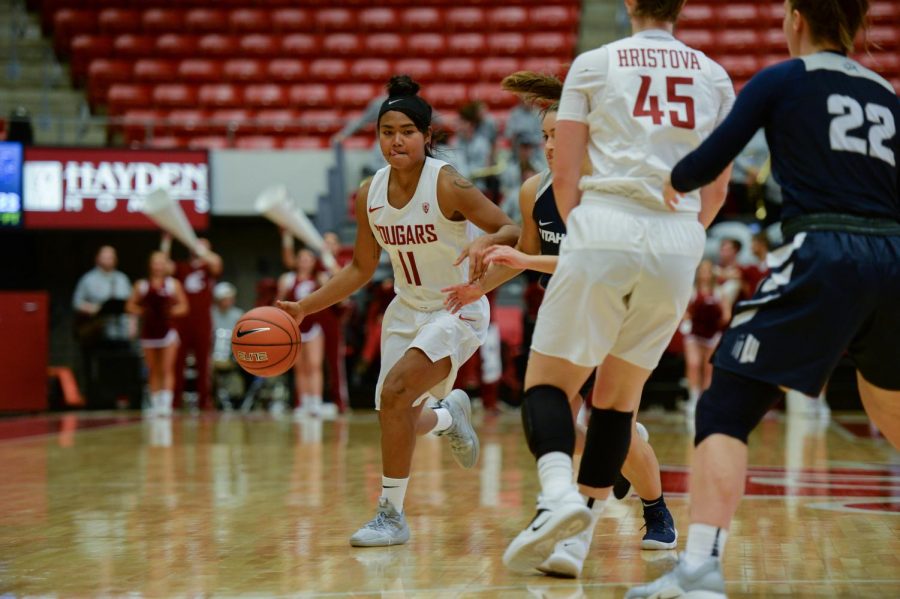 Junior guard Chanelle Molina drives the ball toward the basket in the game against Utah State on Nov. 6 at Beasley Coliseum. Molina has scored 19 points and dished out 12 assists in the first two games of season.

WSU women’s basketball will host University of Nebraska on Friday in Beasley Coliseum. The Cougars (0-2) will be looking for their first win of the season against Nebraska (1-1).

“Those are intangibles that if we don’t do that,” Ethridge said, “we don’t have a chance … those are the things we’re going to build our program on.”

When WSU played Utah State University in its first game of the year, Ethridge said she did not see the team playing with any of these characteristics. However, she felt the team improved in those areas when the Cougars faced Saint Mary’s College of California in their second game.

Ethridge said a challenge the coaching staff is facing is the fact that at this point the team does not know how to keep a competitive edge. She said she thinks it may have to do with the team not having a strong leader this season after several of the leaders from last year’s team graduated or left the program.

As the Cougars prepare to face the Cornhuskers, Ethridge said she thinks the team is attentive with scouting opponents and hopes to see improvement in this game.

“We’re still working on us a lot,” she said. “We’re working on us as a team and what we do but also in how we do it together. Those are areas that we have to show up every day and show improvement.”

In the past two years, WSU has traveled to play Nebraska and won both matchups. Last season, the Cougars claimed a 73-61 victory against the Cornhuskers to finish their non-conference play.

The matchup against Nebraska will be the first time this season the Cougars will play two games in three days as they meet their next opponent, University of California, Davis, on Sunday.

Ethridge said she loves having two games in one weekend because it’s what they will face in conference play.

“This is everything we want to be good at,” she said. “This is a great test for us.”

Tipoff is set for 5:30 p.m. Friday in Beasley Coliseum. The game can also be seen on the WSU live stream.