Cougars will face No. 2 Stanford University for second time this year 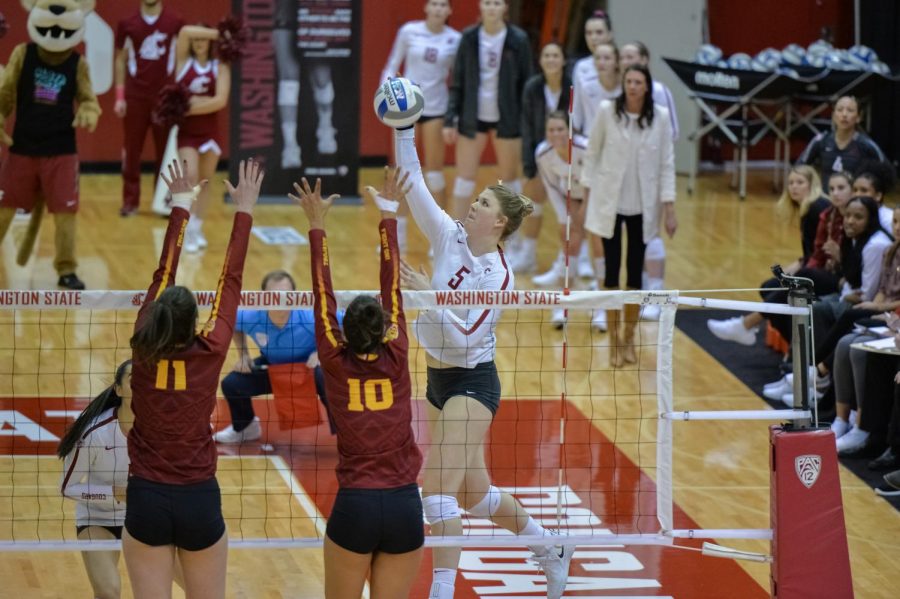 Senior outside hitter McKenna Woodford strikes the ball over the net against University of Southern California on Oct. 19 in Bohler Gym.

No. 18 WSU volleyball will host No. 2 Stanford University on Friday in Bohler Gym.

The second set from that match is one WSU is likely to remember as it was up 22-18 toward the end of the set. After several set points for both teams the Cardinal took the set 30-28, putting WSU in an 0-2 hole.

This deficit was too much to overcome against Stanford, which won the third set 25-12.

Head Coach Jen Greeny said she thinks the Cougars have really improved as a team since that match on Oct. 12.

“We have showed fight and people have had to step up and play different positions,” Greeny said.

Senior outside hitter Taylor Mims suffered a calf strain in the previous match against Stanford, causing her to miss five straight games before returning Nov. 2 against University of Arizona. This forced players to move positions and get different amounts of playing time. With Mims back in action, the Cougars have been getting back into their rhythm.

WSU is coming off a win against No. 21 University of California, Los Angeles, and a loss against No. 13 University of Southern California on Sunday. Greeny said it was a tough road trip facing two very good teams, but she felt the team was able to do some good things against the Bruins.

“We had a balanced attack from everybody,” Greeny said. “A lot of credit goes to our passing.”

Junior setter Ashley Brown had 49 assists against the Bruins and 36 against the Trojans. Greeny said Brown did a good job of seeing her block and getting the hitters involved.

WSU is at home for the rest of its four regular season matches. Greeny said the Cougars are excited to get a good crowd in Bohler Gym and have home court advantage.

“The fans don’t even understand how important they really are,” Greeny said.

WSU will try to use that advantage to get a big victory as it hosts Stanford at 7 p.m. Friday in Bohler Gym.