Cougar soccer travels to Washington D.C. on Friday for second round match in NCAA Tournament 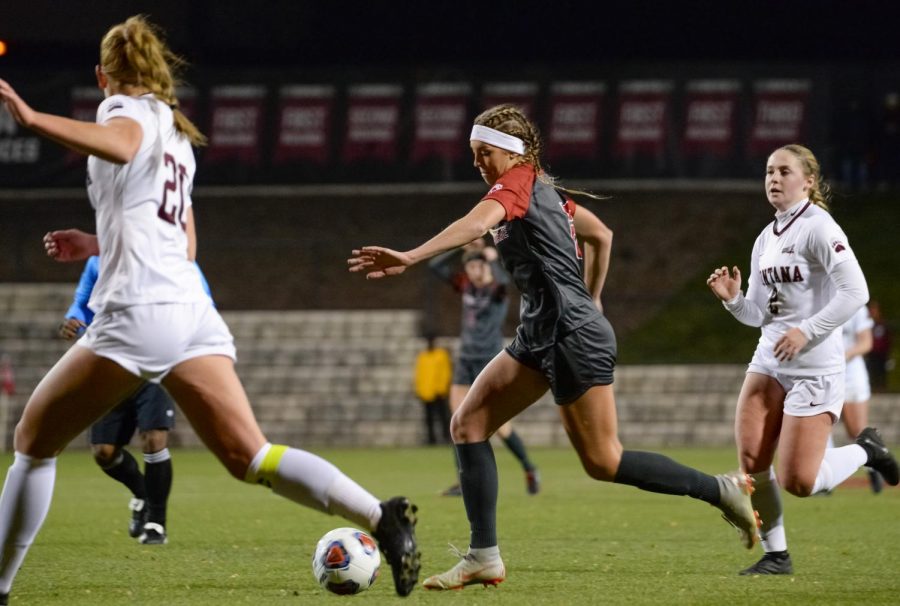 Junior forward Morgan Weaver attempts a shot on goal during the game against University of Montana on Friday night at the Lower Soccer Field. Weaver leads the team in goals this season with 13.

In a season full of challenges and adversity for the WSU soccer team, the Cougars will look to push forward in the second round of the NCAA Tournament on Friday as they take on No. 2 Georgetown University.

After defeating University of Montana 5-1 on Friday at home in the first round, the Cougars now turn their attention to Georgetown, the No. 1 seed on its side of the tournament bracket.

The Hoyas are led on offense by senior forward Caitlin Farrell and graduate forward Kyra Carusa. Farrell has scored 17 goals this season and Carusa has eight. They lead an explosive Georgetown offense that is averaging 2.14 goals per game.

However, maybe more impressive than the offense for Georgetown is its defense, which gives up an average of .38 goals per game and has only surrendered eight goals all season. This is due in part to the phenomenal play of Georgetown senior goalie Arielle Schechtman.

In fact, Georgetown has yet to lose a game all season with an 18-0-3 record going into Friday’s second-round matchup against the Cougars. One thing the Hoyas did not have is a challenging schedule, something WSU had this season.

Being a member of the Pac-12 may require a grueling conference schedule, but it has prepared the Cougars for the challenges that await them in the tournament, WSU Head Coach Todd Shulenberger.

“The Pac-12 is a different beast,” Shulenberger said. “We see our game and our level increase each game with the pace … and the quality of the players increasing as the season goes along.”

Some important players who have stepped up amid a large number of injuries are junior forward Morgan Weaver and senior defender Maddy Haro. Weaver leads the team with 13 goals on the season and Haro is the team leader in assists with 15.

Another key player is redshirt junior goalkeeper Rachel Thompson, who had to step in for injured redshirt senior goalkeeper Ella Dederick before conference play began. So far, Thompson has helped the team with 38 saves in 14 games.

Ever since taking over at goalkeeper, Thompson has been an instrumental piece for the Cougars as she helped carry the WSU defense into the NCAA Tournament. However, she and her teammates face a big challenge on Friday against the Hoyas.

Will the Cougars pull off a major upset and continue their quest towards a national championship or will the Hoyas remain undefeated and keep moving forward? We will find out 10:30 a.m. Friday in Washington D.C. when WSU faces Georgetown. The game will be live streamed on Hoyavision.