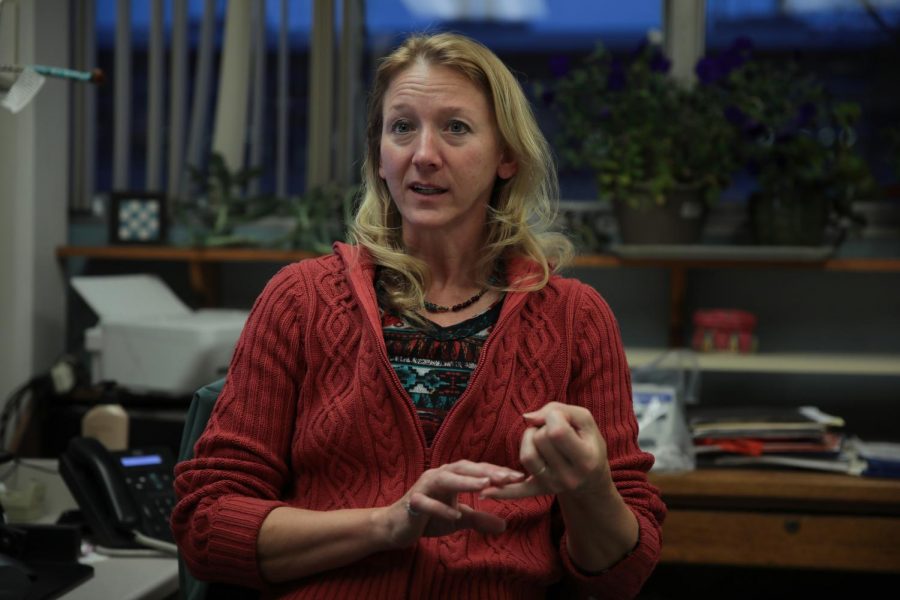 WSU Professor Lynne Carpenter-Boggs discusses the benefits of compost and how it helps agriculture and soil quality on Wednesday in Johnson Hall. The university still provides its original compost blend.

An addition to WSU’s compost facility nearly two years in the making means the university will now offer a certified organic mix for local farmers and garden enthusiasts to nurture their crops.

All compost is organic in the sense that it is composed of carbon and hydrogen bonds from animal and vegetable matter. But the word has taken on a different meaning as well when referring to a product’s exposure to artificial chemicals, said Lynne Carpenter-Boggs, professor of soil science and sustainable agriculture.

To have an organic certification, WSU had to make sure its compost met many pages of regulations, she said.

The Eggert Family Organic Farm previously used WSU’s compost until about 2009, when the organic certifier of the farm brought up issues with the materials in it, Farm Manager Brad Jaeckel said.

Now that WSU’s facilities are organically certified, the farm once again uses the compost.

“We really try to be sustainable with our production and one of the ways to do that is to source compost locally made,” Jaeckel said.

The certified organic compost is more nutrient-rich than the previous product, Jaeckel said.

“It’s a better product for vegetable production,” he said.

Before the addition, local farms were having issues finding certified organic compost, especially at a good price, Carpenter-Boggs said.

Emily Barber, a recent graduate and organic agriculture major who interned for the project in 2017, worked with researchers and other WSU faculty and staff to figure out how WSU could meet organic certification standards.

“We basically just had to have a paper trail of where all the materials were coming from and make sure that no non-allowed materials were making it in there,” Carpenter-Boggs said.

Finch knew where the materials came from, but some certification procedures required very specific details for the WSDA’s regulations, Carpenter-Boggs said.

“It was very frustrating because you really didn’t know what [the WSDA] wanted,” Finch said, “and you think you have one issue to address. You provide them the information to address that, and then it raises more, and it was like you were chasing something you could never catch.”

The main materials used to make the compost is animal bedding and manure from the animal care facilities, he said.

Treated wood is one thing the WSDA does not allow in its organically certified compost, Finch said.

Now they separate the processed wood, which is wood that is used for construction or demolition, from wood that comes from pruning and trees, Finch said.

The WSDA was also concerned with the plastics and other contaminants coming from the dining centers. Biodegradable plastics like the ones used for forks or cups in the dining halls are not allowed in accordance with regulations, Finch said.

While some local farms have started using its certified compost, WSU still sells more non-certified compost. Many places that use the compost are not farms and do not feel a need to switch, Finch said.