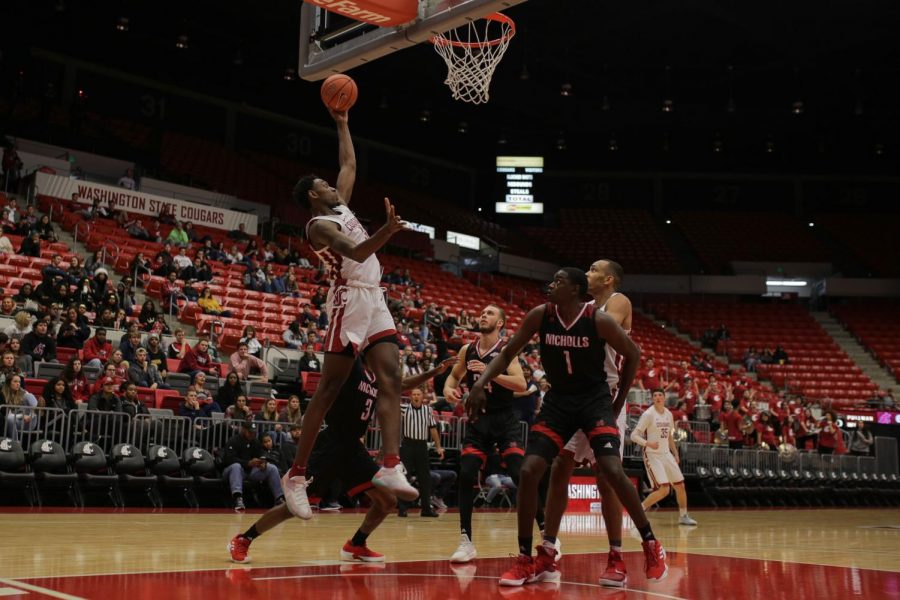 Senior forward Robert Franks Jr. goes up for a dunk in the game against Nicholls State on Sunday in Beasley Coliseum. Franks lscored 31 points and had 11 rebounds in the game.

WSU men’s basketball could not overcome a bad first half as the Cougars fell to Seattle University 78-69 in Kent, Washington on Wednesday night. The Showare Center saw the Redhawks (3-1) have some big runs in the first-half that allowed them to grow a lead against the Cougars (1-1).

Seattle University went on an early 6-0 run followed by a 10-2 run to gain the lead early. The Redhawks followed these with another 6-0 run and built a lead of 15 points in the first half.

These runs were helped by the Cougars’ problems with fouling early on. They had reached the double bonus just 10 minutes into the half, sending the Redhawks to the line every time a WSU foul was committed.

Trailing 28-13 at one point, the Cougars fought hard to climb back into the game and close the distance as the end of the first half grew near.

A huge moment occurred with time dwindling in the first half as the Cougars made a three-pointer. Along with the three, there was an intentional foul on the play to create a five-point swing and bring the team right back into it.

WSU closed the Seattle lead to just six points at halftime which gave the Cougars momentum heading into the second half. It started off with back-and-forth play, with the Redhawks slightly growing their lead until a big run by WSU closed the gap.

A 12-0 run was enough for WSU to take a three-point lead with the score at 51-48. However, this lead wouldn’t last long as Seattle fought to take it right back.

WSU couldn’t come up with any more runs to retake the lead as they fell to the Redhawks by a final score of 78-69. The Cougars were without senior forward Robert Franks Jr. in the loss.

Franks got a double-double against Nicholls University on Sunday scoring 31 points with 11 rebounds and was greatly missed by the Cougar offense in this matchup. Junior power forward Isaiah Wade led the Redhawks Wednesday with a double-double of his own, scoring 17 points along with 10 rebounds.

WSU will look to bounce back from this loss when it heads home to face California Polytechnic State University at 6 p.m. Monday in Beasley Coliseum. The game can also be seen live on Pac-12 Networks.