‘The start of my goodbye’ 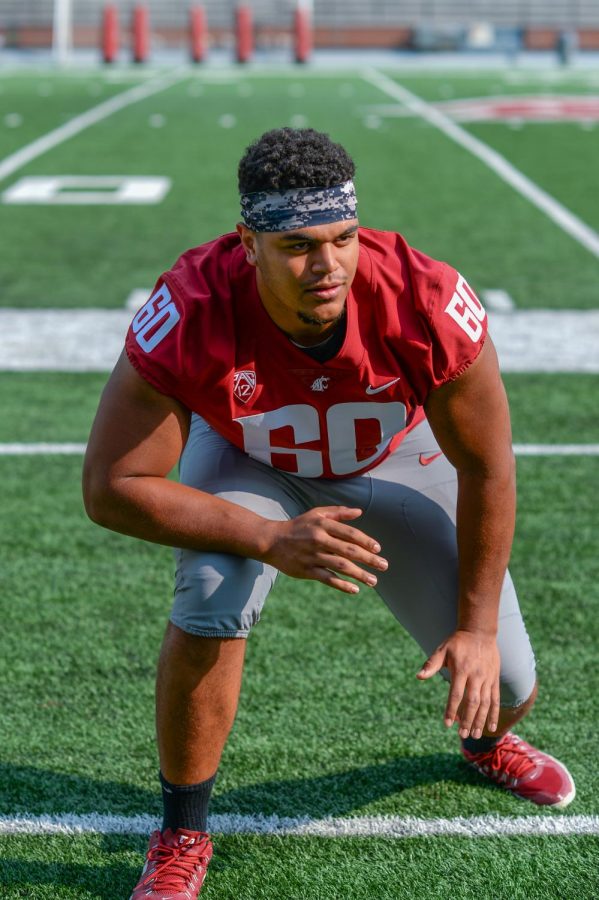 Senior left tackle Andre Dillard didn’t start playing football until eighth grade, but he has a good reason for eventually taking an interest in the sport. “I thought it would make me cool,” he joked.

In football, the arm of a quarterback, the hands of a receiver and the feet of a running back are glorified by the people looking at the sport from the outside.

But for those who have or do play the sport, there is a place they pay attention to where the outcome of nearly every game is decided — the line of scrimmage.

Andre Dillard is very familiar with what happens in the trenches, and as the Cougars’ starting left tackle he knows the work he does on the field usually goes unnoticed.

“The typical fan isn’t going to be watching the [offensive] line every play,” he said. “They’re going to watch where the ball is.”

He said it feels like the O-line and D-line have their own little game going on that is completely separate from the skills positions.

The trash-talking and physical nature of competing in the trenches is unlike any other position on the field. However, Andre tries to stir clear of the words and focuses more on speaking with his play.

“To be honest, I don’t think I’ve ever talked trash to opposing [defensive] lineman,” he said. “I’ve had things chirped at me before but I just don’t say anything and then they shut up by themselves.”

Since Andre took up football, he has become accustomed to the nature of the position because he’s only ever played at one spot on the field — left tackle.

But Andre is a late bloomer as he didn’t start playing until eighth grade, and he had a good reason for picking up the sport.

“I thought it would make me cool,” he joked.

However, it would’ve been natural for Andre to take an interest in the sport as his dad, Mitch Dillard, played at WSU from 1983-86.

Mitch walked on at WSU and started out as an outside linebacker, but the Cougars needed a center and he was willing to do anything to make the team, so he transitioned to that position.

In his senior season, the team moved Mitch to another position. This time it was tight end and that’s where he played most of that year. After college, Mitch played semi-pro football until he was 39 years old.

Once Andre started playing football, it became apparent to Mitch that the sport was meant for him. So Mitch got a blocking dummy from a friend and helped Andre with his footwork and technique in the backyard.

Mitch also gave his son a football 101 lesson when he started since Andre had minimal knowledge about the positions on a football team. He used an electric football game he grew up with as a child to show Andre where each player lined up on the field and their role. Mitch admitted that Andre was a bit embarrassed early on when he knew so little.

“There were times where he was wondering if he even wanted to play football … but I completely understood that because I was the same way,” Mitch said.

But once Andre got the hang of it he fell in love with the game, and when it came time to figure out where he would continue his football career beyond high school, WSU was the only one that showed significant interest in him.

That didn’t bother Andre because he was raised as a Coug fan. He remembers watching WSU play every weekend with his dad growing up, so he followed in his father’s footsteps.

“I was thrilled to death when [WSU] offered him a scholarship,” Mitch said. “I’m so glad he made that choice because I think it was the best place for him to be.”

Now in his final season in Pullman, the senior is looking to take the team as far as he can and continue his career beyond college.

Depending on where you look, Andre is seen as a potential first round pick in the 2019 NFL Draft. Regardless of where he goes, Andre said being drafted would feel surreal.

“I’ve had dreams about that,” he said. “Just calling my name in the draft, that’s just something I’ve always wanted to happen.”

This year Andre has had to adjust to new offensive line coach Mason Miller. Despite hearing from a new voice, Andre said nothing has changed and the bond he has built with his fellow offensive linemen has grown stronger.

Throughout the offseason, Andre said the offensive line spent time together by having barbecues and playing video games.

“My face always hurts from laughing whenever I hang out with all those guys at once,” he said. “It’s just a great time.”

There is one thing Andre has yet to accomplish during his time at WSU that every Coug wants on their resume by the end of their career — an Apple Cup victory.

Andre has had three chances to knock off University of Washington, and each time the Cougars have been blown out, losing by a combined score of 131-41.

Andre knows any game against UW is important.

“Realistically, we just focus on one at a time,” he said, “but when I think about it, it’s my last chance and a couple other seniors’ last chance to finally put them to an end, so we’re going to do everything we can to prepare for that when it comes.”

Mitch said he hopes the fourth time’s a charm against the Huskies.

“I want really badly for him to get to experience that before he leaves, so I will be jacked up for that game,” he said. “I’m sure they want it as badly as a person could want a game.”

Andre said he will be emotional when he steps off the field at Martin Stadium for the final time in a Cougar uniform.