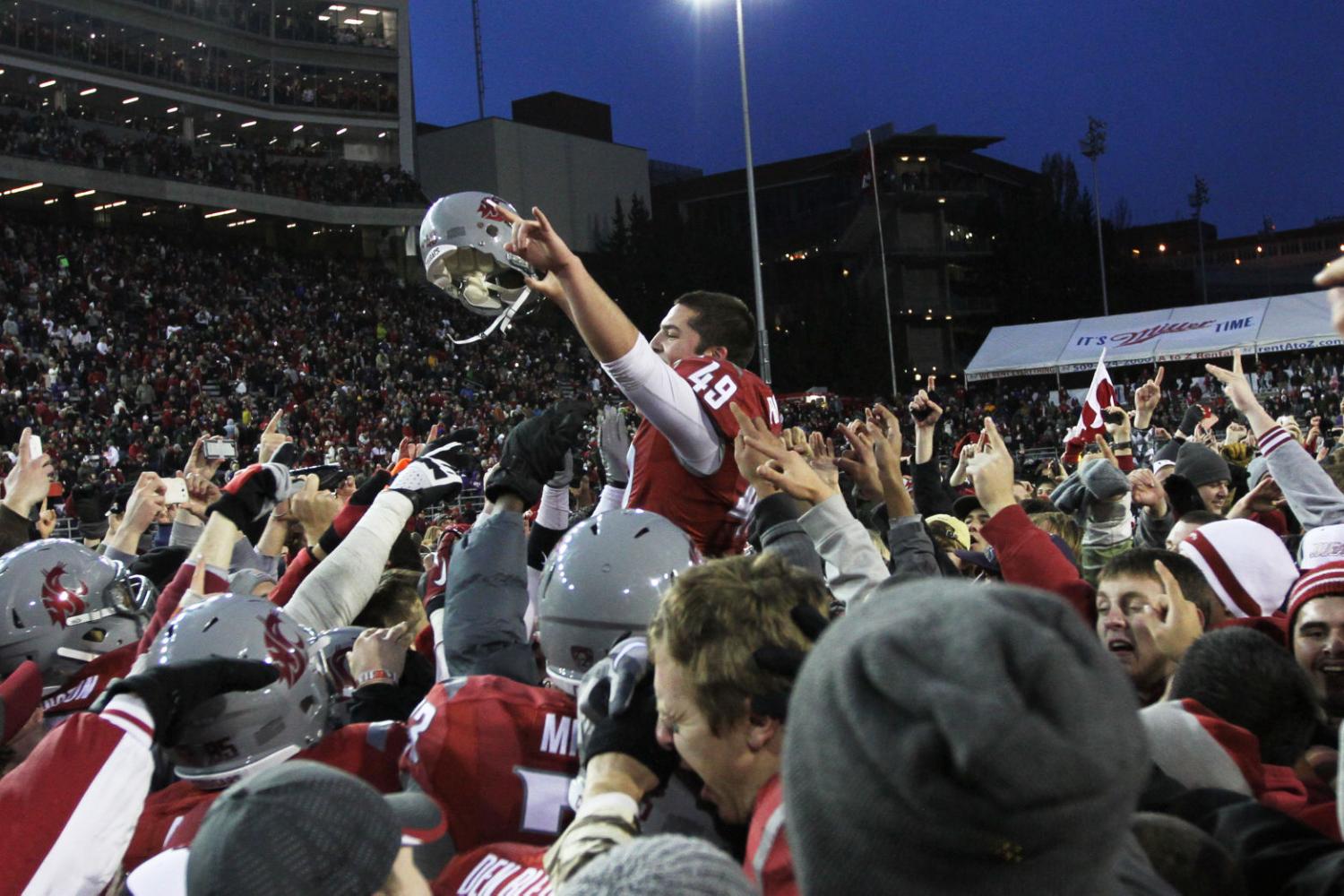 Cougar fans and players carry Andrew Furney off the field at Martin Stadium after an Apple Cup victory on Nov. 23, 2012.

There are very few days over the course of year where a state and even families are divided. However, the time has come when friends and families support their school, even if it means rooting against those closest to them. This is the game Washington college football fans wait for all year: this is the Apple Cup.

Thanksgiving is always a great time to spend with family. However, the weekend after Thanksgiving is likely to cause some issues among families as the Cougars take on the Huskies in the battle for the Apple Cup — and this year, the Pac-12 Championship as well.

All of Washington will turn their eyes to Pullman to see one of the greatest in-state rivalries in all of college football. Though recent history has fallen in favor of the Huskies, who won the last five Apple Cups, the Cougars look to turn their luck around against their rivals from the West.

If there was a time the Cougs look destined to break Washington’s stranglehold on the Apple Cup, it’s this year, as they lead all of the Pac-12 going into this monumental rivalry game.

WSU is led on offense by quarterback Gardner Minshew II, who will be making his one and only appearance in the Apple Cup due to the fact he is a graduate transfer in his final year of college eligibility.

Despite this being his first season on the Palouse, Minshew has been everything and more than Head Coach Mike Leach has wanted as he leads the nation in passing yards going into the final game of the regular season.

Minshew has also been helped out by the play of his running backs, redshirt junior James Williams II and freshman Max Borghi. Both had stellar play throughout the season, whether in running the ball or catching it out of the backfield.

Defensively, the Cougars are led by redshirt senior linebacker Peyton Pelluer, who now holds the record for most games played for the crimson and gray after playing his 52nd matchup against University of Arizona last weekend. He also leads the team in tackles to help an up-and-coming WSU defense under first year defensive coordinator Tracy Claeys.

However, it will be no easy task for the Cougs to take down the Huskies, as Washington has turned its play around after a tough start to the season.

After opening the season on the road with a loss to a very hard-hitting Auburn University in week one, followed by gut-wrenching losses halfway through the year on the road against University of Oregon and University of California, Berkeley, the Huskies look to be playing their best football of the season against WSU.

Washington’s explosive offense is led by senior quarterback Jake Browning, who has yet to lose an Apple Cup in two attempts so far and had an impressive regular season in 2018.

However, WSU may have to keep an even bigger eye on Washington’s senior running back Myles Gaskin, who averages around 100 rushing yards a game this season even though he missed two games with a shoulder injury.

The Huskies are maybe even more impressive on defense where they are led by senior defensive back Jojo McIntosh and senior linebacker Ben Burr-Kirven. Both are expected to be playing in the NFL next season, especially with Burr-Kirven as one of the top tacklers in the nation.

Washington Head Coach Chris Petersen will look to keep up the Huskies’ domination over WSU, with Petersen winning every Apple Cup since he took over as head coach in 2013.

The Huskies have not just dominated the Apple Cup over the last five years, as they have a 72-32-6 all-time record against the Cougars on the gridiron. However, anything can happen in football, especially in rivalry games.

Who will win the bragging rights for the next year, and more importantly, who will represent the Pac-12 North in the Pac-12 Championship Game?