Cougs must overcome stout UW defense to walk away with trophy 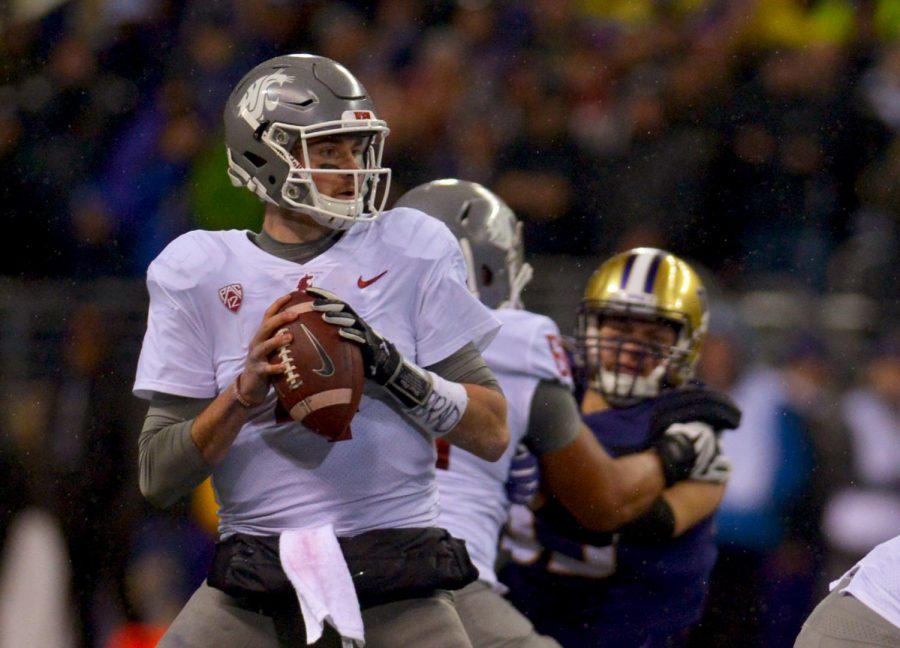 Then-redshirt senior quarterback Luke Falk was under constant pressure from the UW defense during the 2017 Apple Cup game held in Husky Stadium.

The Apple Cup is upon us once again and we all know of WSU’s struggles in the rivalry with Washington. Since Mike Leach took the helm, the team is 1-5 in Apple Cups. The sole victory came in overtime in 2012 and the five losses came by an average margin of 23.6 points.

But this year is different. WSU enters the final week of the regular season as a top-10 team in the nation, while UW has struggled to an 8-3 record. The Cougars need to take advantage of several key matchups if they want to beat the Huskies and make a trip to their first-ever Pac-12 Championship game.

Last year’s Apple Cup was a nightmare for WSU quarterback Luke Falk, who was sacked five times. This year, WSU looks poised to win the trenches on the offensive side of the ball.

Through 10 games this season, WSU has allowed only seven sacks, good for third best in the nation. This matches up extremely well with a UW defense which has sacked opposing passers only 16 times through 10 games. A dominant offensive line paired with the mobility of quarterback Gardner Minshew II should allow the Cougar passing offense to run smoothly.

WSU has been on fire through the air. Entering the game against Arizona this past weekend, the Cougars had the nation’s top passing offense, averaging 392.3 yards per game. The team has yet to have a down game with Minshew passing for at least 300 yards in the first 10 games, the only quarterback in the nation to do so.

The Apple Cup will feature a dominant passing defense as Washington is second in air yards allowed per game, giving up only 189.2 passing yards per contest. WSU has passed a statistically stiffer test already this season when it defeated University of California, Berkeley, 19-13 on Nov. 3.

Despite scoring a season-low 19 points against Cal, the offense still moved the ball, amassing 413 total yards and 334 through the air. WSU must continue to have success through the air to be successful against the Huskies’ defense.

Although these two units won’t ever see the field at the same time, this matchup will be hugely important. Ten of the last 12 Apple Cup winners scored at least 30 points in the game. WSU has a huge advantage in this area, averaging 37.6 points per game and scoring at least 30 points in eight of its games this season.

UW has struggled to score this season, averaging only 26.6 points per contest and scoring at least 30 points through 10 games. If the script holds, WSU has a huge upper hand on the quest to score 30 points.