How Ben Burr-Kirven leads from the middle

Linebacker saw role elevate after senior was suspended, hasn’t looked back since 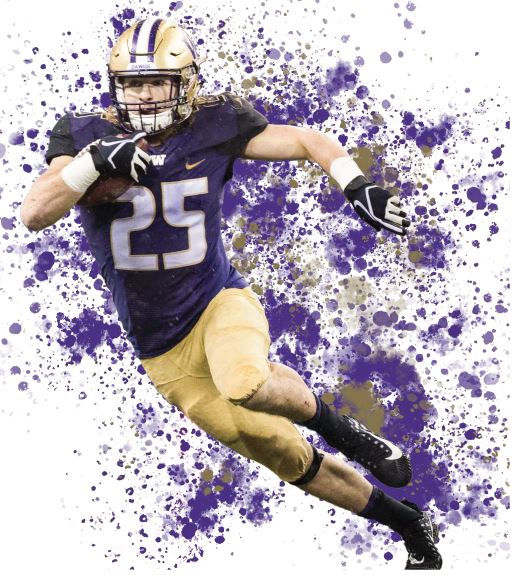 Burr-Kirven led the Huskies in tackles in eight of their 13 games last year. “Playing linebacker, it’s your job to make tackles, that’s how it’s always going to be,” he said.

Football — like love, like business, like life — is a game of give and take. When Washington went to Salt Lake City to face Utah earlier this season, Ben Burr-Kirven took first. Then he gave.

Late in the first quarter, Burr-Kirven was hot on the tail of a scrambling Tyler Huntley. Hot on the tail, that is, until Siaosi Mariner came in from the side and blindsided the UW linebacker.

He never saw him coming.

“If I had seen him coming, I wouldn’t have let him hit me,” Burr-Kirven said. “That sucked. It always sucks, but it happens. It was a good play by him, a good block, so I can’t complain.”

The next quarter, it was Burr-Kirven’s time to give.

Facing third-and-2 just inside UW territory, Huntley took the snap and faked a jet sweep. The Utah offensive line double-teamed both UW tackles, forcing a hole right up the middle and leaving Burr-Kirven staring down the Utah quarterback.

“I came under the center and he was right there,” Burr-Kirven said. “I was like, ‘Alright, well, hopefully I’m not going to get run over.’ Once I saw him coming I felt pretty good about it.”

Huntley needed to reach the UW 44-yard line. Burr-Kirven hit him at the 45.

“He played it perfect,” defensive coordinator Jimmy Lake said. “When it’s going to be a high tackle like that, interior, that’s how you play it. It was an awesome hit.”

Since then, as always, Burr-Kirven has been in a very, very giving mood.

They call him BBK. It’s a small nickname, for a man that came to Montlake weighing less than 200 pounds.

A three-star recruit out of Menlo Park, California, Burr-Kirven bulked up and played his way onto the field as a true freshmen, earning the team’s Most Outstanding Special Teams Player award. Since then, he’s been a steady, consistent factor for the Huskies. Since Burr-Kirven came to Montlake, the UW has played 44 games; he’s appeared in 37 of them and has only failed to register multiple tackles in three.

“He’s fast, he’s really, really smart, and he’s as tough as they come, and that’s how you want them all built,” head coach Chris Petersen said. “He’s got great instincts, and he’s also smart. I think those two things are a little bit different, and that’s what makes him special.”

Going into the 2017 season, Burr-Kirven was set to be the third inside linebacker on the UW depth chart, first off the bench behind the starring senior duo of Azeem Victor and Keishawn Bierria. Then, fate intervened.

Before the Dawgs’ Week 1 game at Rutgers, news came down that Victor would be suspended and unavailable. BBK’s time to start would come a year ahead of schedule.

“It was not how I anticipated things working out, but you have to roll with the punches,” Burr-Kirven said.

In his first start, he did more than that, leading the UW defense in tackles. Then he went out and did it again in Week 2. And Week 3.

“You have to take those opportunities,” Burr-Kirven said. “College football is a competitive game, there’s always great players, and everyone wants to get onto the field. You look at our team, and there are so many guys who could start that aren’t starting yet. Everyone’s fighting to get on the field, and if you get an opportunity, you’ve got to take advantage of that.”

Come the end of the season, Burr-Kirven led the Huskies in eight of their 13 games. His 84 tackles were first on the team, 24 more than Bierria in second place.

“Playing linebacker, it’s your job to make tackles, that’s how it’s always going to be,” Burr-Kirven said. “No matter what defense you’re running, the linebackers should be the ones making the tackles; it’s our job. It comes with the territory in the position.”

Come 2018, Bierria and Victor had left Montlake for the NFL, and BBK had a new partner in the middle. Tevis Bartlett moved inside after three years on the edge, bringing a different sort of physicality but lacking much experience. It became a beneficial partnership for both; Burr-Kirven showed Bartlett the finer points of the position, while Bartlett helped Burr-Kirven –– one of the faster linebackers in the Pac-12 –– use his hands and to shed blockers instead of going around them.

“It’s been awesome,” Bartlett said. “Ben knows a lot of stuff about inside linebacker, he’s [been] playing it for forever, probably since junior high, and this is like month four for me.

On the field, the plays have kept coming to BBK, and he’s continued to make them. Burr-Kirven has led the Huskies in tackling each of their first four games. He’s averaging 13.3 tackles per game, tied for third in the nation and first in the Pac-12.

“The more you play football the easier it gets,” Burr-Kirven said. “Getting some starts last year helped a lot, and you just need growing, keep improving. The more time you spend in the film room, the more time with Coach [Bob] Gregory, four years now. There’s been a lot of work put into it, so I definitely think I am getting better.”

Now, Burr-Kirven is coming off what to this point is a signature performance last weekend against Arizona State. The Sun Devils came in trying to run the ball up the middle early and often, a recipe for a big game for the middle linebackers.

By halftime, Burr-Kirven had 11 tackles — tied for second-most in his career. On ASU’s first drive of the third quarter, he forced a fumble that the Sun Devils ultimately fell on.

On Arizona State’s next drive, Burr-Kirven didn’t leave it up to chance, forcing another fumble and this time recovering it himself.

“They’d had a couple fumbles, it was frustrating when we didn’t get one,” Burr-Kirven said after the game. “We kept saying, ‘We’re going to get one here.’ So I saw his back turned, got a good hit on him from behind and as soon as I saw the ball I said, ‘Aw, that’s mine, I’m going to take that.’”

By the end of the third quarter, he was up to 16 tackles — a career high. He finished the night on 20; it was the highest total for a UW player since John Fiala notched 22 against the Sun Devils in 1996.

Not that anyone on the sideline — or Burr-Kirven himself — had much clue.

“I didn’t have any idea of how many I got,” Burr-Kirven said. “I knew I had a lot, but I definitely wouldn’t have guessed 20.”

The performance gives Burr-Kirven 53 tackles on the season thus far, putting him on a possibly unreasonable pace to pass 200 on the season. No UW player has hit that mark since 1985, but even if Burr-Kirven cools off a bit to his normal torrid pace, he’s set to become the first Husky to break 100 tackles since John Timu in 2014.

That’s still a lot of giving.