Once a Coug, always a Coug

Cornerback will take field for final time after being doubted, fighting through adversity 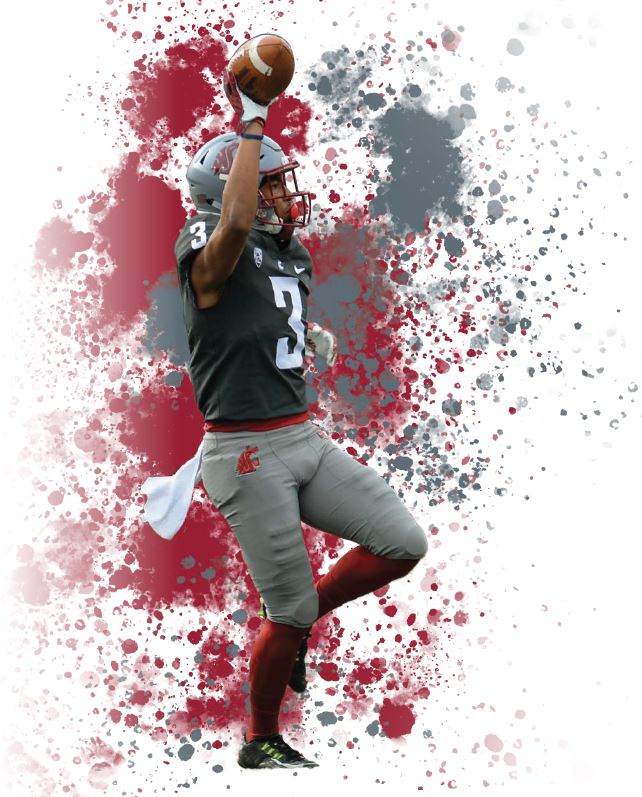 Kevin Molton, Darrien’s dad, said his son is looking forward to taking on UW in the Apple Cup and is desperate for a victory. “I think he wants it as bad as anything he’s ever wanted in his life,” he said.

It’s rare when a football player arrives on a campus and starts from the very get-go. But senior cornerback Darrien Molton did and he hasn’t surrendered the role since.

He wasn’t just given the starting spot though, he had to earn it and Darrien’s dad, Kevin Molton, said that is something his son has done his whole life.

“This kid’s a workaholic,” Kevin said. “With me, anything and everything I’ve asked him to do, he did it.”

But his journey to Pullman didn’t come without a few bumps in the road.

In high school, Darrien hit a growth spurt that he admitted may have been too fast for his size. This caused Darrien to develop Osgood-Schlatter disease, an injury due to repetitive use that causes knee pain in growing adolescents and could lead to a lump developing above the kneecap.

Darrien had to miss half of a season to fully recover from the injury, but he got through it. Then three games into his senior season, Darrien had to get his gallbladder removed.

By the time he went in to have it removed, it was severely infected which extended Darrien’s timeline to fully recover. This led to Darrien missing the rest of his senior season.

Darrien said doctors wanted him to be cautious before deciding to return to the field.

“They didn’t want me to come back to fast because if I would’ve got hit or something like that in my stomach, it could’ve been real bad,” he said.

Kevin said they all had a shocked look on their face when they saw Darrien and how small he was.

“I don’t think they believed he could be as good as he was just based on his size,” he said.

At the time, Darrien was still recovering from having his gallbladder removed and Kevin said his son lost up to 25 pounds during the process.

But Kevin said coach Wilson had watched Darrien’s tape and seen him play in person and knew what he was capable of.

The coaches told Darrien it was going to take some time for him to get acclimated to playing in college and basically told him he might have to redshirt his first season.

But Kevin wanted to make sure they would give Darrien a chance to compete for a spot regardless. Wilson reassured him they would.

“No one knew [Darrien] like I did,” Kevin said.

His dad was right because once Darrien stepped foot on campus everyone took notice. Darrien weighed in at 160 pounds when he arrived in Pullman, but that didn’t hold him back.

Kevin said Darrien called him within the first week and told him he was going to play that season. Kevin was encouraged to hear that everything was going well, but he didn’t make much of it because the Cougars didn’t have any pads on.

Then Darrien and the team made the annual trip down to Lewiston for fall camp and Kevin lost contact with his son for about nine days while they were cut off from the outside world.

Kevin went to bed that first night Darrien was in Lewiston at 6 p.m. because he was so nervous and was just hoping to hear something positive about his performance at camp.

The next morning, Kevin woke up to a text that asked him if he had seen what his son had done. Darrien had three interceptions on the first day.

Of course, Kevin had no idea what was going on because he was in California and had no way to reach his son. But on the third day of camp, Wilson sent a photo of Darrien asleep on a bench and told Kevin that his son was getting reps at nickel.

Day-by-day, Darrien worked his way from the bottom of the depth chart to taking snaps as the starting cornerback.

Kevin said it was exciting to receive messages every day about how well his son was doing and how quickly Darrien was working his way past players that had more experience, but it wasn’t surprising.

“I know a football player when I see one,” he said. “My eyes tell me that [Darrien] can play football not some scoreboard.”

So Darrien started at a cornerback in his freshman season and his performance on the field showed his worthy of it. Pro Football Focus named Darrien one of the top two true freshmen cornerbacks in the nation after the 2015 season.

Now heading into his final home game in a Cougar uniform, Kevin recognizes how much Darrien has grown as a player and a person during his time in Pullman.

“I can tell you first hand that this has been the most incredible experience and ride of a lifetime,” he said. “Not only for Darrien but our entire family because … he’s given us something that most people could only dream of.”

Kevin said he’s been proud of his son’s ability to fight through obstacles throughout his career.

“He’s had adversity,” he said, “but he’s always come back stronger and better than ever and with a positive attitude because he works hard.”

Darrien said at the end of season he hopes he can look back and know he left it all out on the field. He also wants to be recognized as one of the top corners in the conference.

Darrien’s final chance to play at Martin Stadium will be Friday when WSU takes on UW in the Apple Cup. The 21-year-old has not been on the field for a Cougar victory over the Huskies in his career. He has one last chance and his dad knows it.

“As a 54-year-old man, I want to suit up and help him get over the hump,” Kevin said. “I think he wants it as bad as anything he’s ever wanted in his life.”

Kevin said he thinks Darrien has already started to imagine what it will be like to step off the field at Martin Stadium for the final time and knows it will be special for him.

“I think the memories that he’s built there and the time he’s shared there,” he said, “it’s probably going to be really sad for him leaving because I can already tell that it’s starting to hit him and we’re just trying to keep focused on … once you’re a Coug, you’re always going to be a Coug.”