No. 18 Cougar volleyball falls to No. 2 Stanford

WSU wins only one set in loss to Cardinal, records no blocks in first two 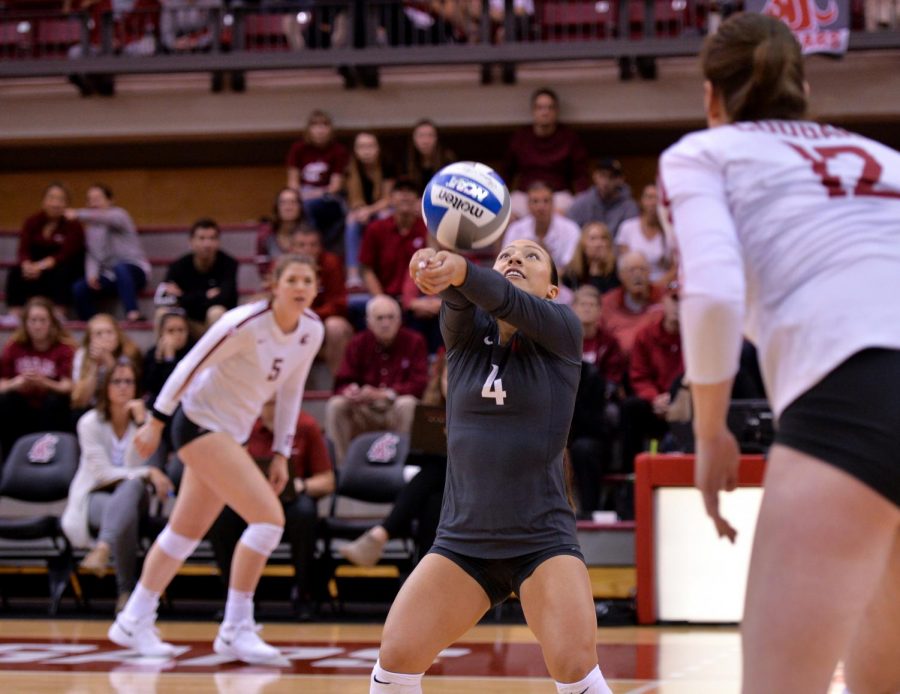 Junior libero Alexis Dirige hits the ball in the game against the University of California, Los Angeles on Oct. 21 in Bohler Gym.

No. 18 WSU volleyball fell to No. 2 University of Stanford 3-1 on Friday in Bohler Gym.

“They’re No. 2 for a reason … You really have to play almost a perfect match … to be able to beat them and that’s why only one school has,” Head Coach Jen Greeny said.

Stanford (25-1) started the match with a serving error by sending the ball into the net, giving the Cougars (19-8) a point. WSU and Stanford had 12 ties and five lead changes in the first set, but the Cardinal would pull away from the Cougars and go on the win 25-16.

Stanford dominated the second set and only allowed WSU to tie it up on the first point with a score from senior outside hitter Taylor Mims. Stanford made multiple errors to give the Cougars points, but that would not stop the Cardinal from taking the second set 25-16.

After two sets the Cougars had recorded no blocks, but that stat would change in the third set.

There would be no ties or lead changes as the Cougars came out fighting and blocking right away. The team scored four points before Stanford would get its first. WSU did not let up on its attack with points coming from multiple players.

With a point by senior middle blocker Claire Martin, the Cougars took a 17-8 lead. Stanford cut that lead down, but WSU eventually won the set 25-22 and recorded six blocks. The team recorded a total of 15 kills in the third set.

“Before that third one, [Greeny] was like ‘We’ve got to get our block going,’ ” Mims said.

Greeny said the passing and serving improved in the third set.

In the fourth set, the Cougars came out strong again leading 12-5, but Stanford went on a six-point streak to get within one and tie at 13 soon after. WSU regained its lead only to see the Cardinal tie it up at 16 and again at 17.

Stanford then led for the first time since the second set at 18-17. The Cougars would tie it up one more time at 18 before Stanford took the lead, winning the set 25-20 and taking the match.

The Cougars recorded a total of 10 blocks. Mims led the team with 14 kills, while junior setter Ashley Brown had 35 assists and junior libero Alexis Dirige had 15 digs.

Greeny said consistency is something the team can improve on in their final three matches.

“[We should be] working on just being more consistent in every aspect of the game,” Greeny said.

The Cougars will face University of California, Berkeley, at noon Sunday in Bohler Gym.