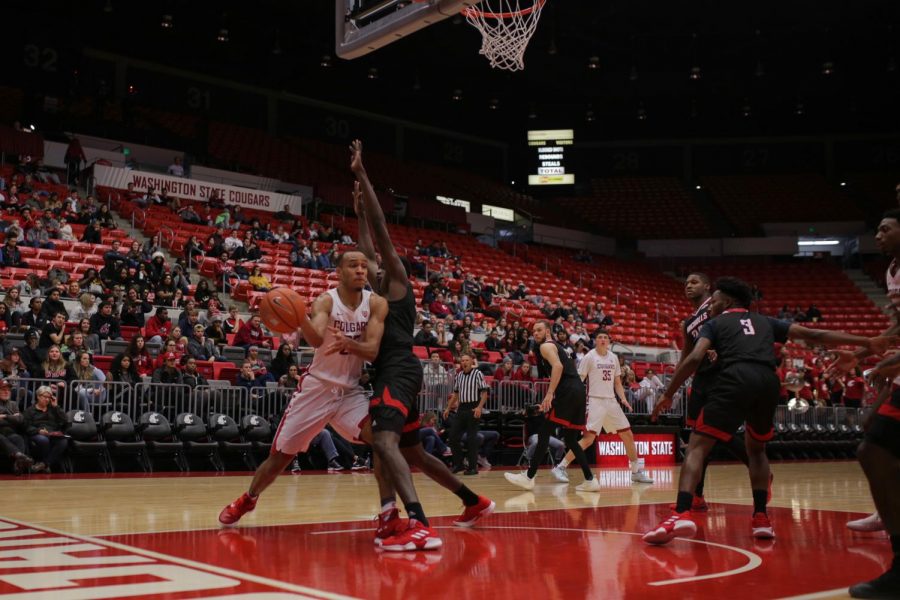 Redshirt sophomore forward Arinze Chidom passes the ball to a teammate during the game against Nicholls State on Nov. 11 in Beasley Coliseum.

WSU men’s basketball cruised to a 84-70 win over California Polytechnic State University on Monday in what would be a one-sided game right from the start.

The Cougars (2-1) exploded on offense in the first few minutes knocking down five of their first seven shots in the first four minutes to jump to a seven point lead against the Mustangs (1-2). With WSU senior forward Robert Franks Jr. returning to the court from his injury, he scored two easy buckets within the first two minutes of play and would go on to finish with 15 points in the first half.

WSU was sharing the basketball extraordinarily well, getting everyone involved and scored on 11 of its 16 shot attempts within the first nine minutes of action.

WSU junior point guard Ahmed Ali might be the smallest guy on the court but he had a big impact, scoring six points from behind the three-point line and dishing out two assists in 10 minutes of play.

Cal Poly’s offensive struggles were a problem early, shooting just 38 percent overall and 20 percent from the three-point line. The Cougars defense continued to harass the Mustangs defense picking up nine points off of six turnovers and four steals in the early stages of the first half.

With three minutes remaining, Cal Poly’s offensive approach changed, focusing on attacking the rim rather than relying on the three pointer as they scored seven quick points reducing the deficit from 20 to just 14. However, the Cougars depleted the Mustangs confidence by answering with 12 straight points in just a minute and a half.

The Cougars were lighting up both ends of the floor leading 54-27 by the end of the first half. Cal Poly shot just 34 percent from the field, turned the ball over 11 times and were out-rebounded 20-15 in 20 minutes of play.

A rough beginning for the Mustangs wasn’t enough as their game carried over into the second half. Nothing was working for Cal Poly on either side of the court as turnovers became a normal occurrence.

Despite trailing by 30 points, the one bright spot for the Mustangs on Monday night came from senior point guard Donovan Fields who carried the team on his shoulders leading the team in points, assists and steals.

In addition to Fields performing well, Cal Poly shot 55 percent from the field in the second half

However, with a rough start and WSU’s versatility, this game was decided in the first few minutes. Franks continued to haunt the Mustangs playing well on both ends of the court and finishing the night with 30 points.

WSU returns to the court 7:30 p.m. Saturday to face Delaware State University at Beasley Coliseum. The game can also be seen live on Pac-12 Networks.