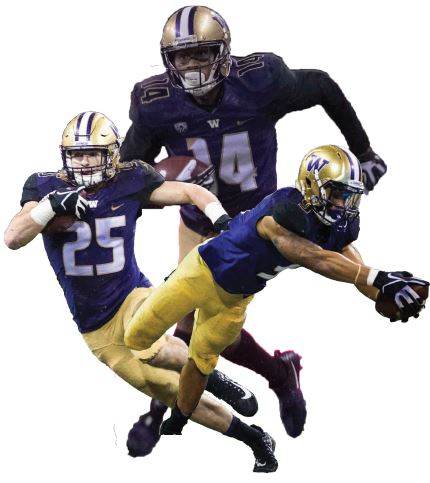 Look, it’s the obvious choice, but it has to be made. No matter how good Jake Browning and the UW passing attack is, the Washington offense at its best begins and ends with Gaskin. An shoulder injury hampered his October — the Colorado game was the first in his four years on Montlake that he missed — but a 148-yard performance against Stanford made it pretty clear that he’s feeling fine now. Throw in a bye week before the Oregon State game last week, and he should be one of the fresher players on the field.

Last season in Seattle, Gaskin had one of his best games, racking up 192 yards on 25 carries and reaching the end zone four times to tie a career high. Washington has rushed for at least 240 yards in three of the past four Apple Cups, and there’s no reason to believe the Huskies will try anything different Friday.

Full disclosure: This was written before Washington’s game against Oregon State, so exact and up-to-date numbers are tricky. But I can say with absolute certainty that Ben Burr-Kirven will come into Friday’s game as UW’s leading tackler.

Leading a shallow corp of middle linebackers, BBK has exploded onto the scene in the center of the UW defense. After leading the Huskies in tackles last year, he’s done even better in 2018, spending the whole season at or near the top of the national leaderboard.

Through 10 games, Burr-Kirven reached double-digit tackles in eight, logging 20 against Arizona State. He’s also racked up five pass deflections, good for second on the defense as a linebacker, picked off a pass, and forced four fumbles.

Burr-Kirven led the Huskies with seven tackles in last season’s Apple Cup, and pulled in one of the Dawgs’ three interceptions.

The Apple Cup in past years has become a strength-on-strength matchup between the WSU Air Raid and the UW secondary. So far, the Huskies have won the battle every time, and this time around, the defensive backs UW brings to Pullman could be its best batch yet.

On one side, Byron Murphy could well be the best cornerback in the Pac-12. Opposite him, the battle between Jordan Miller and Keith Taylor has been neck-and-neck, with Taylor gaining a bit of an edge with Miller missing time due to injuries. Jojo McIntosh is the hard-hitter. Taylor Rapp may be the best player in the group, Myles Bryant may be the smartest, and Elijah Molden could well be one of the best backups on the west coast.

Washington has consistently saved its best game of the season in the back end every year for the Apple Cup, and we’ll see Friday whether the Huskies can make it five straight.