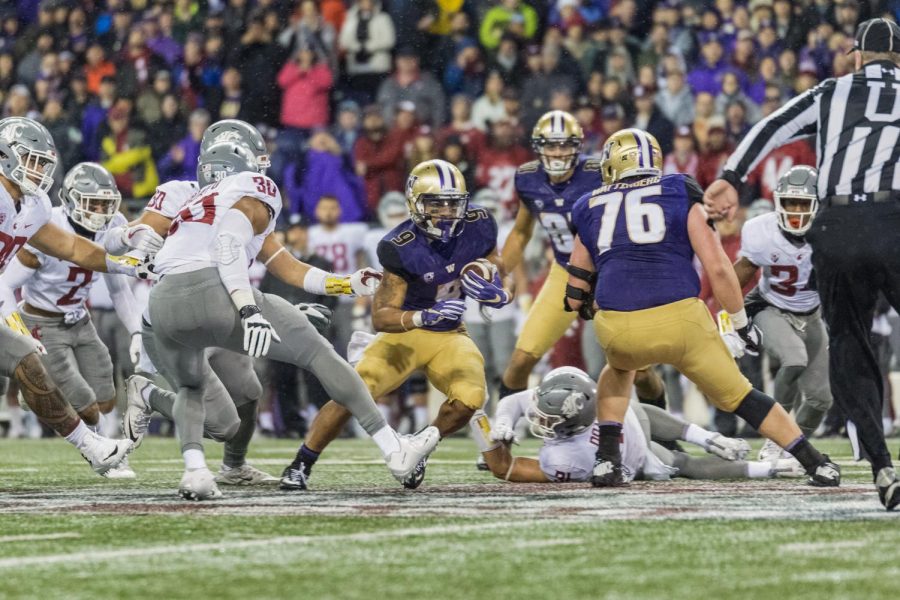 Myles Gaskin breaks through the WSU defense during the 2017 Apple Cup.

This has been a key since Chris Petersen’s first season at Washington, where for the duration of the previous Apple Cups, Washington State’s receivers haven’t been able to get separation from a talented group of defensive backs.

After last season’s 41-14 win, former safety Ezekiel Turner didn’t hold back when asked about the recent dominance of their eastern rivals.

“They are a system offense,” Turner said. “We know what they are going to do going into a game. They stay true to film, whatever you’re going to watch is what you’re going to get. We get a good rush on [the quarterback], come up and get hits, picks, and PBUs.”

If Washington’s touted defensive backs, including first-round talents Taylor Rapp and Byron Murphy, can punish Cougar receivers and intimidate them from the get-go, Washington State may struggle to throw the ball.

Key 2: Get pressure on Gardner Minshew

This is way easier said than done, especially given both of these teams’ strengths and weaknesses. The Cougars are tied for No. 3 in the entire NCAA in sacks allowed, having given up only seven, and two of those teams are triple option-style offenses (Army and Air Force).

On the other end, the Huskies are statistically in the bottom third of the NCAA in team sacks with just 15, ranking in at No. 107, nationally.

However, in years past, Washington has been able to get pressure on WSU’s mostly immobile quarterbacks, and been able to force mistakes. With Minshew’s ability to stretch the pocket and actually avoid a pass rush, the Huskies’ may struggle to generate pressure. If they can find a way to pressure Minshew, they could limit that offense to less than 20 points for the fifth consecutive year.

Key 3: Get in third and manageable on offense

This has been a key focus of the Washington offense all season, as Petersen has emphasized getting between third-and-2, and third-and-4 scenarios all season long. One of the biggest problems the Huskies have faced this season is their propensity to fall into third-and-long situations.

Offensive coordinator Bush Hamdan has a tendency to either run on first down, or attempt a play-action pass. If that pass falls incomplete, or the run play gets stuffed, the Huskies will face 2nd-and-long.

Another failed run play or an incomplete pass will almost certainly ruin Washington’s chance at extending the drive. Penalties come into play here too; while the Huskies aren’t a heavily penalized team — they average 44 penalty yards per game, good for No. 20 in the NCAA — an errant holding call will have huge repercussions on a UW offensive possession.

Another key from past games: the Washington offensive line has often asserted its dominance over a normally much smaller Washington State defensive line. As great as Hercules Mata’afa was for the Cougars, the Huskies’ much bigger o-line always found ways to shut him completely down.

Take the last four seasons combined Washington rushing total, 924, and average it, and the Huskies have averaged 231 rushing yards per Apple Cup. In comparison (I know, it isn’t fair because Washington State isn’t a rushing team, but still an interesting stat), the Cougars average 32.75 rushing yards per Apple Cup (I excluded the -38 sack yardage that was lost due to eight sacks in 2017).

If the Huskies can control the line of scrimmage, and dominate the time of possession with the run, they’ll be in good shape.

This sort of goes into Key No. 1, but on offense and defense in the last four Apple Cups, Washington has just played like they are the big kids on the block. Whether it’s been in Pullman or at Husky Stadium, the Huskies have just outmuscled, out-efforted, and outplayed the Cougs with a strong run game and a physical performance on defense.

If the Huskies believe they are that much better than the Cougars, that will go in a long way in how well they play on Friday.