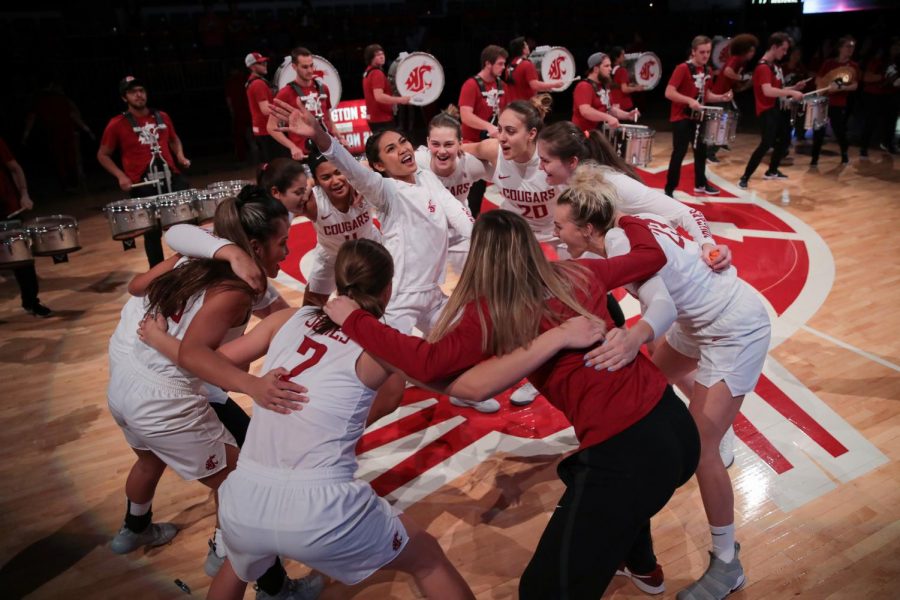 The WSU women's basketball team huddles up before the game against University of Nebraska on Nov. 16 in Beasley Coliseum. The Cougars picked up their first road win of the season against Jacksonville State University on Saturday.

WSU women’s basketball went 1-1 in games in the Warner Center Marriot Thanksgiving Basketball Classic over the weekend at the Matadome in Northridge, California.

The Cougars (2-4) faced host team California State University, Northridge (2-4), on Friday. This was WSU’s first road game of the season and it resulted in a disappointing loss for the Cougars.

Junior guard Chanelle Molina and senior guard Alexys Swedlund showed off their scoring abilities, combining for 33 of the Cougars 52 points.

Following this loss, WSU regrouped and came back for a 64-51 win against Jacksonville State University on Saturday afternoon.

“I thought we really dominated the game,” Head Coach Kamie Ethridge said. “We still have our spurts and still have moments where we just struggle scoring the basketball, but at least today we had a really great effort on the defensive end.”

Swedlund was hot out of the gates after the previous night’s performance as she hit two big three-pointers to get the Cougars started. They were up 15-11 after the first quarter.

Lockdown defense was the story of the second quarter for WSU as the team only allowed the Gamecocks to score seven points.

Extending its lead to 34-18, WSU needed to follow up with a strong second half to close out the game and earn its first road win of the season. Redshirt junior forward Borislava Hristova helped the team stay ahead in the third quarter.

Hristova got her first career double-double within three quarters with 15 points and 10 rebounds. She finished the game with 18 points and four assists, along with a career-high 11 rebounds.

A five-minute scoreless streak for the Cougars left the door slightly open for the Gamecocks before Swedlund slammed the door shut with another three-pointer.

The Cougars won the game by a final of 64-51, giving them their first road win and second overall on the season.

WSU will come home to Beasley Coliseum and host the University of San Francisco at 7 p.m. Thursday.