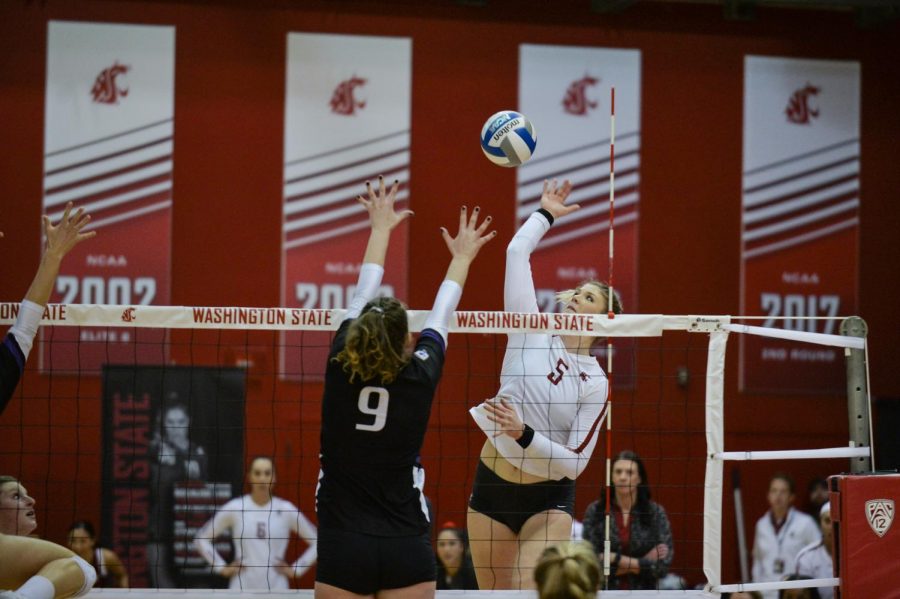 Senior outside hitter McKenna Woodford hits the ball against University of Washington on Saturday in Bohler Gym.

No. 20 WSU volleyball closed out its regular season with a thrilling five set victory over No. 19 University of Washington on Saturday.

This was the second time these teams met this season. The first match back in September in Seattle resulted in a 3-2 win for the Huskies.

After a cold and snowy Apple Cup game on Friday night, fans marched through slush and snow wearing scarves and mittens to watch these two teams play. WSU came out on fire in the first set and walked away with 25-14 first set victory after a nearly seamless performance.

The tables turned in the second set as the Huskies made some hasty adjustments. Making only one error total in the set, the Huskies went on the hunt for kills as both junior outside hitter Kara Bajema and sophomore outside hitter Samantha Drechsel turned the leaderboard to purple numbers instead of crimson. UW won the set 25-16.

Starting the third set, the Cougars scored on an attack error by Bajema. The crowd exploded with excitement as their cheers ended up leading the Cougars on a scoring run.

The Cougars kept on scoring with a kill by senior middle blocker Ella Lajos that began a 4-0 run to give WSU a 13-4 lead. The Huskies took a timeout and came out with newly found confidence as they made a 3-0 scoring run.

With tensions high from the third set, it became sudden death for the Huskies in the fourth as each team would go on low scoring runs to keep it neck and neck. With the score tied at 14-14, UW was able to use five errors by the Cougars and a 4-0 run to win the set 25-18.

In the decisive fifth set, both teams started out hot. The Huskies kept it tight at 4-4 but the Cougars went on a set of runs to take a 12-6 lead.

The Huskies called a timeout to regroup, but it was no use as the Cougars closed out the set 15-10 to win the match. This was WSU’s first win against the Huskies since 2016 and its first home victory against them since 2009.

The Cougars now await to hear who they will play in the NCAA Tournament.