Taproom throws itself a birthday party 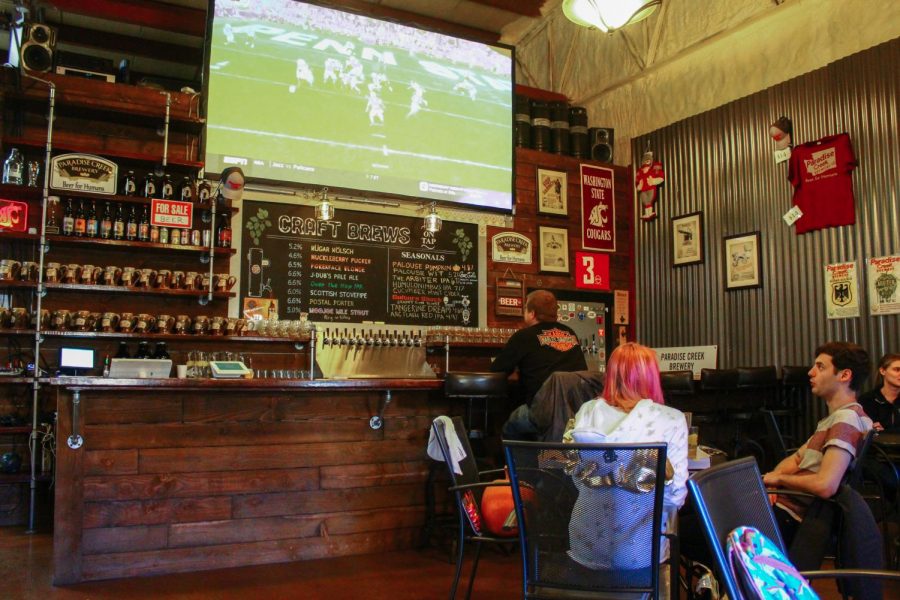 After opening during Thanksgiving weekend last year, Paradise Creek Brewery’s Trailside Taproom is ready to celebrate its first year of business. The taproom will invite customers this Tuesday to enjoy the festivities with live music, free cake and $3 beers.

Event Coordinator Emily Dennis has helped the location grow since she joined the Taproom in May. She said owner Tom Handy brought her on to improve one of the only breweries in Pullman.

“He wants people in here as much as I do,” Dennis said. “He’s really given me free rein to get people in the door.”

In that time, Dennis said she’s worked hard to engage with her regular customers and host events that will hopefully bring others back to the taproom. From canvas painting to yoga to comedy nights, regular customers can expect Dennis to put on two or three different events within a week.

Dennis said she learned fast. She said strategies that may work in a popular brewery in San Francisco don’t always work in Pullman. Despite a couple setbacks here and there, she is happy to be a part of the taproom while it’s in its early stages.

“It’s the reason I was attracted to work here,” Dennis said. “I could really see it from the ground up and watch its progress. I’m proud of the guys brewing great beer and proud of my hard work getting it out there.”

Not many breweries stand in Pullman but, being part of a new brewery, Dennis said she acknowledged different bars in the area create competition.

“A lot of people come back to town and remember their great college bars like Valhalla and The Coug,” Dennis said. “That’s great — I love those bars — but because our location isn’t right off the road, people don’t notice it right away.”

Dennis said although it’s been hard breaking out into the community, she is glad Paradise Creek is turning into what she considers the ideal brewery. The Trailside location has a unique look with its woodwork and brew tanks out in the open. Sometimes customers can even hear people brewing.

Beyond the taproom, Dennis said she is glad to develop a busy but uncrowded space. The music doesn’t drown out conversations, and customers can enjoy a large screen to watch Cougar games with an atmosphere that lends itself to conversation.

Over the last several months, Dennis said she has come to know many regulars since working at Paradise Creek.

“Every Friday we have a group of geology professors,” Dennis said. “I have all their numbers memorized and I just look forward to seeing them. Same with the people with [Taproom Trail Runners]. Say one person doesn’t come who normally comes — you start to notice.”

Dennis said her collaboration with the run club creates more of a tight-knit community within the Taproom itself, since the small group goes for runs and then reunites at the brewery on a weekly basis.

It is because of these sorts of people that she is excited to celebrate the Taproom’s first birthday, Dennis said.

“It’s a celebration for everyone who have helped us get here,” Dennis said. “It’s not a profit thing, we’re just getting everyone together and of course it’s an incentive for anyone who hasn’t been here before.”

Dennis said she believes the Trailside Taproom will have another successful year. She looks forward to continuing the brewery’s success with the second Brushes and Brews event on Dec. 5, and the running club each Sunday and Monday.

“We’re not your normal bar,” Dennis said. “It’s just a matter of getting [newcomers] down. People are into their normal routines, and we just want to fit ourselves into those routines.”