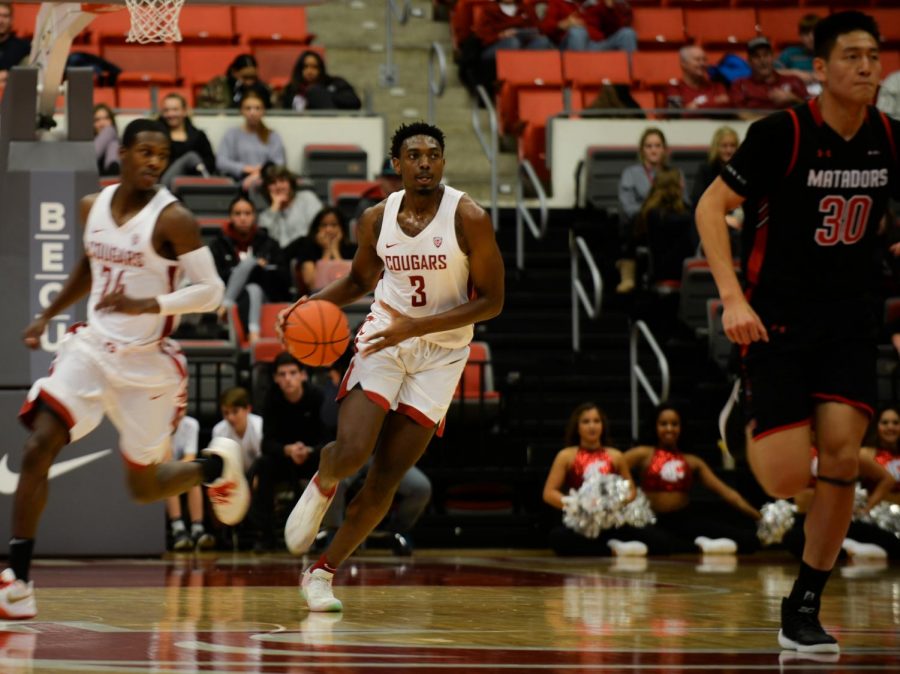 Senior forward Robert Franks Jr. dribbles the ball down the court during the game against Cal State Northridge on Tuesday night at Beasley Coliseum.

WSU men’s basketball performed strong on both ends of the court in a 103-94 victory against Cal State Northridge on Tuesday night.

This was the first time the Cougars eclipsed the 100 point mark in regulation since 2002.

Both teams got off to a fast start. In the first few minutes of the game, the Matadors (1-4) shot 50 percent from the field while WSU (4-1) converted 75 percent. Senior forward Robert Franks Jr. opened the scoring, knocking down one of his two free throws and hit a quick three-pointer shortly after to give the Cougars an early advantage.

Franks would finish the night with 22 points and seven rebounds, his lowest scoring game so far this season.

The Matadors were shooting well inside the paint, but struggled from beyond the three-point arc going 0-3 through seven minutes of action while WSU hit 3-5 to increase its lead to 10.

Franks wasn’t the only difference maker for the Cougars in the first few minutes and the game. Freshman forward CJ Elleby had a career high 23 points in the game to go along with 11 rebounds and four assists.

The Cougars won the turnover battle against CSUN for the majority of the first half compared to Sunday’s game against Delaware State where the team recorded a season high in turnovers. WSU forced six turnovers in the first 20 minutes, scoring 11 points off of them.

What worked really well for WSU was sharing the ball, a common theme for Head Coach Ernie Kent’s team so far this year. The Cougars bench scored 28 points in the first half.

The Cougars went on a 10-2 run in the final two minutes of the first half to take a 54-36 lead into halftime.

In the second half, the Cougars continued to try and attack the basket inside the paint but found themselves struggling in the first four minutes. WSU shot 2-6 while the Matadors hit 4-5 to cut into the lead and put pressure on the Cougar defense.

The Cougars then stepped up in the final 10 minutes of the game on both sides of the ball to take the momentum back into their hands. Not only did WSU adjust on offense, but the team moved from a zone defense to full court pressure and three man traps around the perimeter which allowed them to make key stops and increase its lead to a game high 20 points.

The Matadors found themselves failing to knock down any key shots late in the game as WSU pulled away to claim its third straight win.

The Cougars will hit the road for the second time this season to take on New Mexico State at 6 p.m. Saturday at the Pan American Center.