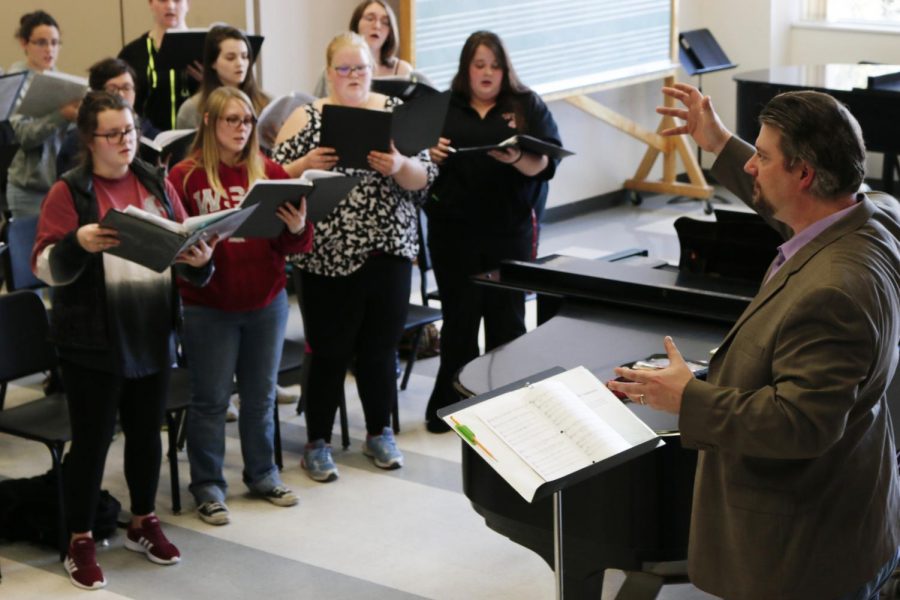 Dean Luethi, director of the School of Music, conducts the WSU Treble Choir on April 18, 2017 in Kimbrough Music Building. Practicing music has many mental health benefits for both adolescents and adults, and promotes a diverse education.

Students may find comfort in decompressing from the stress of higher education as well as gaining greater intellectual bandwidth by taking advantage of musical courses and facilities at WSU.

Being heavily left-brained, I had a strong disposition for slacking when it came to musical courses I was required to take in elementary and middle school.

When I took advantage of my liberal education at WSU, however, I reconnected with music and found that WSU programs and instructors uniquely tailored their courses to appeal to a wider range of students and learning.

When I took Musical Style in Composition, I learned all the basics of reading music in a manner that allowed me to stay academically successful. While in class, I found myself constantly taking notes and asking questions due to the course appealing to my interests of major historical developments in American and European culture.

“My biggest thing is seeing the big picture; I want students to be prepared for the things they can’t imagine yet,” said Denise Snider, undergraduate adviser and instructor of music.

I still lack the coordination to ever become anything great, but when my then-12-year-old brother who suffers from autism grew a passion for the piano, I had the knowledge and fundamentals to connect with and guide him.

From information students can use when they become parents to facilitating an environment that nurtures career ambitions, students truly get the most out of interacting with music at WSU.

They are given the opportunity to let out the frustrations of daily life in a contrastive manner through artistic expression while learning a skill that has endless applications.

Many find participating in music and expressing themselves artistically to be a therapeutic activity.

“We aren’t professionals, but we are amateur psychologists,” said Dean Luethi, associate professor and director of the School of Music.

As a continued feature in students’ lives, music promotes a healthy and more active mind.

“Get into music,” Snider said. “It’s better for your brain than drugs.”

Comical implications aside, the empirical evidence certainly seems to suggest so.

Playing musical instruments triggers the overwhelming majority of your brain simultaneously, helping it build better connections within itself and process information, according to a Ted Talk by educator Anita Collins.

But this isn’t just exclusive to children and developing adolescents.

“A new study from Boston Children’s Hospital found a correlation between musical training and improved executive function in both children and adults,” according to Psychology Today.

Instilling something in your life that requires discipline and constant attention to detail inspires traits consistent with a successful and ambitious individual.

You may be terrible at playing music, like me, or find your interests are more easily satisfied elsewhere. By putting in a little time and effort each day into honing your craft, however, you’ll find there’s a holistic experience for anyone.

Students looking to blow off steam or try alternative methods of structuring their lives in a disciplined manner should participate in the music department at WSU in some capacity.