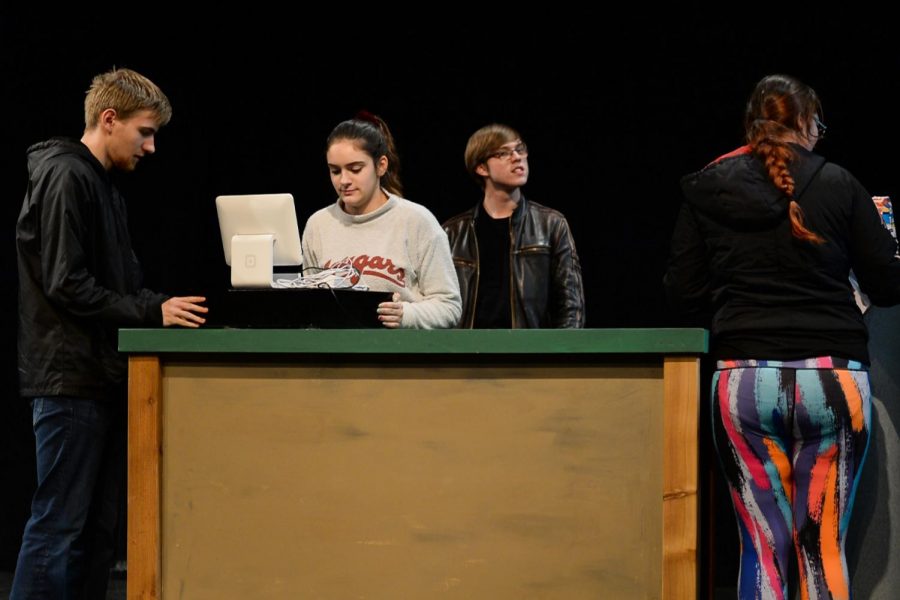 The cast of “Do Baristas Like Burritos?” prepare their set as the entire crew practices transitions between plays Wednesday in Wadleigh Theatre. STAGE One plays are written and directed by students.

STAGE Student Theatre will perform four one-act plays about chocolate cake and having confidence in yourself Friday.

STAGE Adviser Devin Mendenhall said “Do Baristas Like Burritos” consists of two friends at a coffee shop with one trying to muster the courage to ask a barista out on a date. STAGE President Aryn Allen said the play is about awkward people doing awkward things.

“It’s about loving who you are and making sure that everybody else doesn’t feel like they’re less than human,” Allen said.

She said students will also present a play about a father who recently lost his daughter but still continues to celebrate her birthday in “Chocolate Cake.” His friends and family continue to come together to mourn the loss of his daughter while they learn how to communicate their feelings to each other.

In “The Suburban Hermit & Her Armageddon Pig,” two sisters reconnect with one another after each experiences hardships that bring them together, Allen said.

Allen’s own play, “Strawberry Cheesecake,” is about a girl who gets dumped and goes through the process of grieving with her vagina. The play explores how people can complete themselves despite who comes into their life or leaves it. It took Allen three hours to write, but she said she did not know how to express her idea at first.

She said most writers write plays when they come to mind, but for her, ideas come as she goes through events in her life.

“I have a weight on me and I need to let it go,” Allen said. “That’s where my plays come from — releasing that story from me so that I can breathe a little bit.”

She said STAGE received a $4,000 grant from the ASWSU Crimson and Gray fund to cover the payment needed to rent Wadleigh Theatre, but the program hopes to request funds from the Services and Activities Fees Committee to “avoid barriers” for future funding.

“It makes it easier for us,” Allen said. “We don’t have to continue to try to raise money for things, and we can just continue to do theater.”

Mendenhall said it costs about $2,000 to rent the theater from Sanctuary Yoga and about $2,000 more for a lighting technician. He said it’s frustrating when people view those involved with art as a waste of time.

“My background is in film, so I kind of know how it is for people in the arts,” he said. “Often it’s the first thing to be cut.”

The plays will be shown at 7:30 p.m. Friday, with two other performances at 2 and 7:30 p.m. Saturday at Wadleigh Theatre.

General admission tickets cost $10, $5 for WSU students and $7 for University of Idaho students.