Student organization encourages people to look for their ideal selves within, get inspiration at meetings 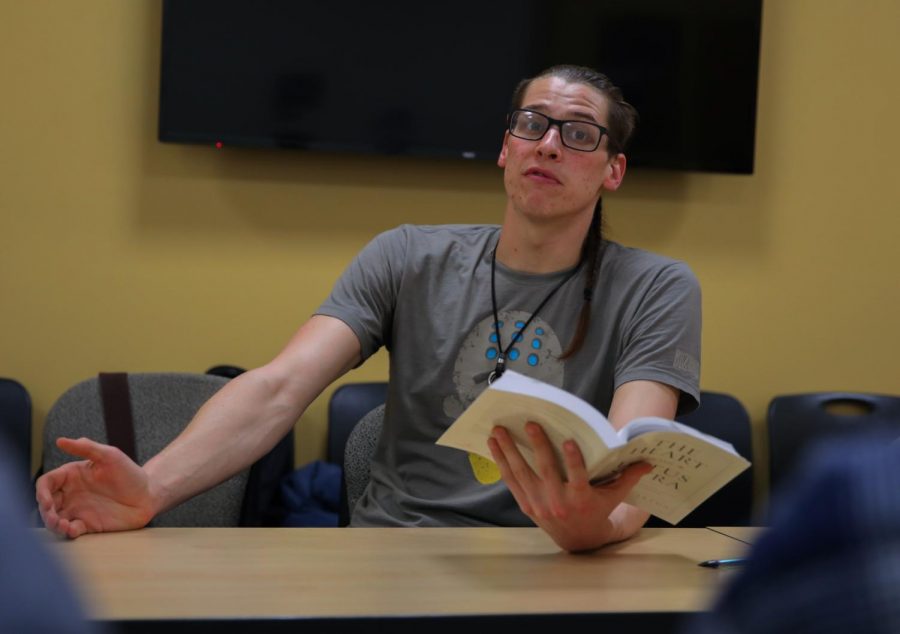 Joseph Ostheller, president of the World Peace Buddhist Club, reads out of “The Heart of the Lotus Sutra” during the club’s weekly meeting Wednesday in the CUB. The club hopes to bring meaning to students’ daily activities.

To many, the word “Buddhism” can conjure up images of bald men in robes, but the WSU World Peace Buddhist Club hopes to reveal more about the philosophy than the apparel.

Joseph Ostheller is a junior electrical engineering major and serves as the club’s president. He said he believes the heart and soul of Buddhism is for people to create joy and positive feelings from suffering.

Ostheller said his all-inclusive club believes everyone can get value out of their weekly activities.

“Do your absolute best to live the most authentic existence you can,” Ostheller said. “That’s the only requirement.”

The requirement to join the Buddhist club may be small, but Ostheller describes the act of practicing Buddhism as profoundly difficult. He said daily practice is essential in order to find the path to happiness and joy.

“It is very difficult, the same way that going to the gym is difficult,” Ostheller said. “It’s a lifestyle and it’s a life you have to choose. But it’s the best one to be living.”

Ostheller said he began his club last year with several friends. He said after the first meeting he never saw them again.

In the club’s first year, Ostheller said he had consecutive weeks in which he walked into the club room all alone. He said he felt very disheartened and wondered if the club would survive its infancy.

“I took the time and I just chanted for the entire hour I was there,” Ostheller said. “Just like, ‘I want someone to show to this club. I need someone to be here. There has got to be someone searching for something in their life that I can help them find.’ Then the next week nobody showed up.”

Ostheller said the club spirit survived after he met new members who joined this year.

One of those members is Skye Reynolds, who currently serves as the club’s secretary. Unlike other members, she has been practicing Buddhism since she was 13 years old and is very familiar with the philosophy, she said.

“What I really like about this practice is that it encourages you to study,” Reynolds said. “You also learn about this power and this potential that each individual has and you can elevate your life condition.”

Reynolds said she was struggling with depression and had contemplated suicide when she first found Buddhism. She said ever since, she has felt connected with herself in a way she hadn’t before.

“What I grew up with was kind of suppressing,” Reynolds said. “I took everything as my responsibility even when it wasn’t. The only person I need to seek forgiveness from isn’t God or my siblings, my mother or my father. It was from myself. The first time I realized that, [I] was practicing this Buddhism.”

Ostheller said in Buddhism, everyone has an ideal self they can find if they put effort into finding it. He and the club meet each week to help people find that person within themselves.

Anyone who is interested in learning about Buddhism can do so by attending a World Peace Buddhist Club meeting from 4-5 p.m. Wednesdays in CUB, Room L38. Ostheller said meetings feel refreshing rather than draining.

“I can almost guarantee after you walk out of there you will feel like you have energy because that’s what we like to bring,” Ostheller said. “There is a version of you who is beautiful and powerful and can conquer any obstacle that comes into your way and you just have to tap into it.”