Volleyball downs Northern Arizona to advance to second round 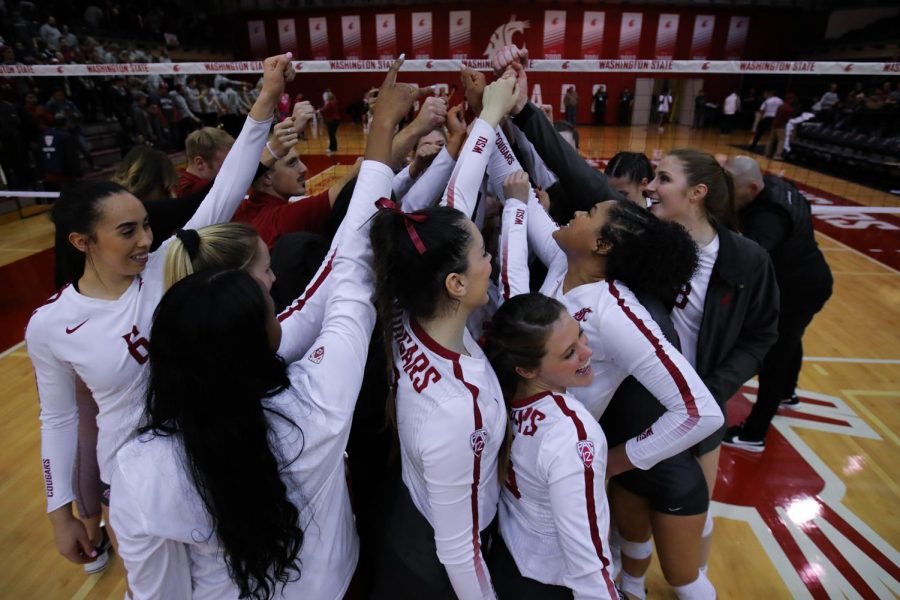 WSU volleyball celebrates its win over Northern Arizona on Friday at Bohler Gym.

No. 16 seed WSU volleyball hosted and defeated Northern Arizona 4-1 in the first round of the NCAA Tournament on Friday.

Service errors were the story of the first set for the Cougars (22-9, 12-8) as on three occasions, WSU failed to serve the ball over the net.

Even with these three service errors, the Lumberjacks (26-9, 15-3) could not build a sustainable lead over the Cougars.

NAU was forced to take a timeout when senior outside hitter Taylor Mims and senior middle blocker Claire Martin combined for a block to give WSU a 18-16 lead.

Mims said that being able to play at home for this match was exciting.

“Being in your house and knowing the environment is fun for sure,” Mims said.

Out of the timeout, the Lumberjacks used a 5-0 run to take a 21-18 lead to force WSU Head Coach Jen Greeny to call a timeout of her own.

Set two started similar to the first and WSU trailed 12-10 before junior libero Alexis Dirige used an ace to start a 5-0 run to give the Cougars a 15-12 lead. From there, the Cougars flexed their muscles and took a commanding 2-0 lead in the match after winning the second set 25-15.

“The crowd helps a lot,” Urias said. “It gets you going.”

Momentum stayed with WSU early in the third set as the Cougars used their height up front to get some big blocks and take a 14-8 lead.

Just as they did in the first set, the Lumberjacks used a timeout to gather themselves and comeback to narrow the Cougars lead.

However, the Lumberjacks used the timeout to their advantage once again and forced a fourth set with a 25-22 win.

Greeny said that volleyball is a game of momentum and it can swing quickly at any moment in a match.

“We had a big lead and then the gap was closed,” Greeny said.

Senior middle blocker Ella Lajos had a huge kill in the fourth set to get the home crowd back into it. NAU struggled to find an answer for Dirige’s serving and the Cougs took an early 5-1 lead.

Lajos added a few kills of her own as well as an ace to build the WSU lead to 22-17. Woodford sealed the match with a kill to give the Cougars a 25-21 win.

Greeny was happy with the win against a high-quality opponent, but said the team needs to play a lot better Saturday to progress in the tournament.

“Passing is our number one focus,” Greeny said. “We need everybody to play just a little bit better.”

WSU will host Tennessee at 6 p.m. Saturday in Bohler Gym with a chance to move onto the third round of the tournament. The game can also be seen on the WSU live stream.