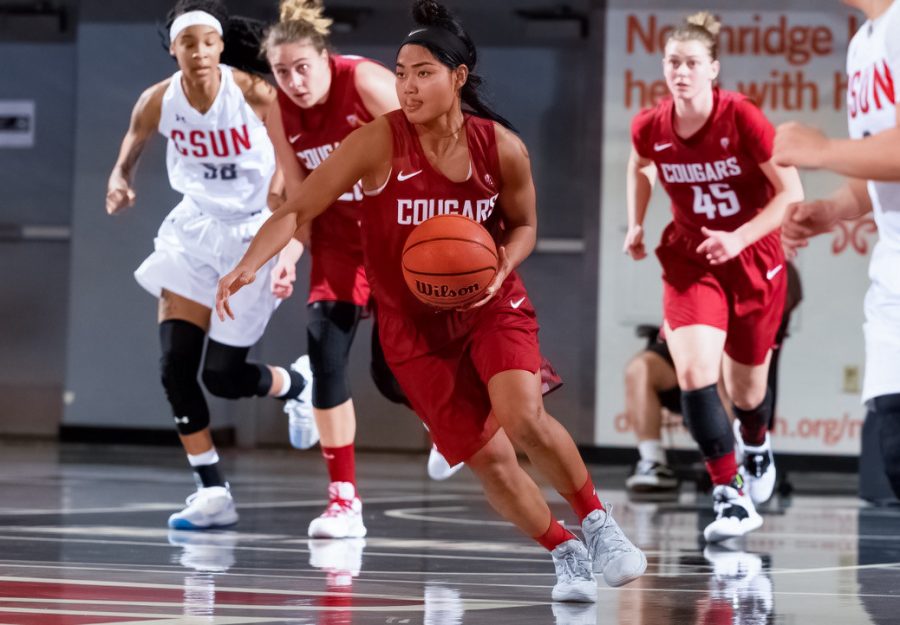 Junior guard Chanelle Molina drives down the court in the game against California State Northridge on Nov. 23. The Cougars extended their winning streak to three games and made 90-plus points for the second game in a row Saturday in Beasley Coliseum.

The Cougars (4-4) extended their winning streak to three games and their 95 points is tied for the 10th most they have ever scored in a single game. This is the first time in program history the Cougars have recorded 90-plus points in back-to-back games after scoring 91 points against San Francisco on Thursday.

Head Coach Kamie Ethridge said the effort shown was exactly what she has been wanting to see.

“We came out and they just played unbelievably hard, maybe for a full game for the first time this year,” Ethridge said.

WSU started out the game by taking the lead and did not look back. The Cougar defense forced multiple Bronco turnovers and shots with seconds left on the shot clock. WSU kept Boise State from scoring until there was under six minutes remaining in the first quarter.

WSU finished the first quarter converting 12 out of its 16 field goal attempts  to lead 30-15 over the Broncos.

Junior guard Chanelle Molina said they played hard from the start and the defense was disrupting the Boise State offense.

“We handled the ball really well when they pressured us and we got the ball moving really well on offense,” Molina said.

The Cougars would continue to control the rest of the game. WSU would have its longest scoring run of 20 points and its largest lead of 31 points in the second quarter.

In the third quarter, WSU was plagued by miscommunication errors helping the Broncos secure their best field goal percentage in a quarter during the game. But that would not be enough to stop the Cougars, who led 72-49 at the end of the third quarter.

Senior guard Alexys Swedlund said the team has been trying to find itself this year and thinks this is a huge step for the team going forward.

“I think tonight was about the team and I think that we made a transition tonight where everybody contributed,” she said. “Everybody played their best and I think this is a start.”

“I loved her game,” Ethridge said, “and then the fact that she ran the floor and got an easy layup and made a couple other baskets.”

“It’s always just fun to do this with them, and the rest will just take care of itself,” Hristova said. “Wins, losses, you know, we’re just going to get through it.”

The Cougars will head north to Spokane to face off against Gonzaga at 2 p.m. Sunday at the McCarthey Athletic Center. Both Hristova and Molina said playing with consistency is one thing the team needs to improve on before they face the Bulldogs.