Last time WSU made it this far in tournament was 2002 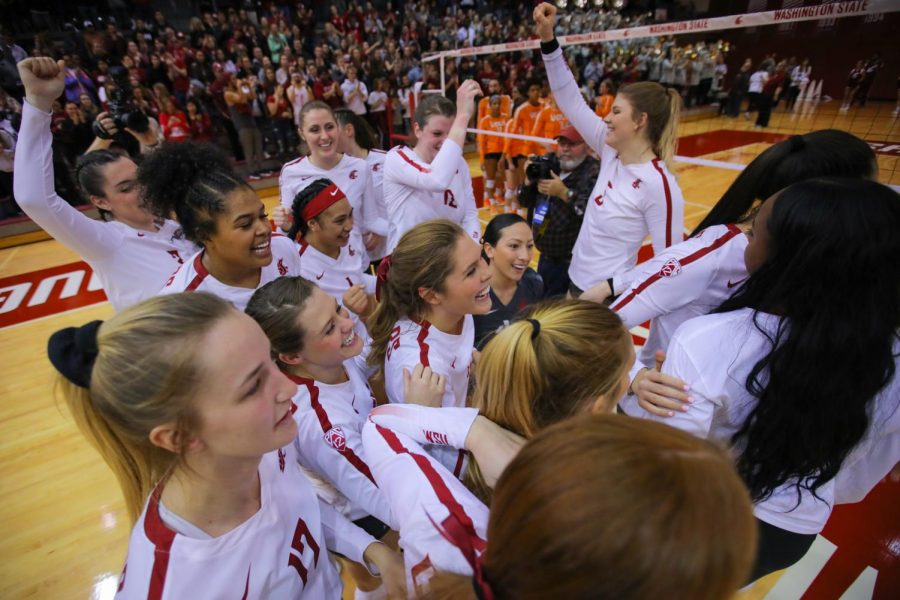 WSU volleyball celebrates after winning the match against Tennessee on Saturday in Bohler Gym to advance to the third round of the NCAA Tournament.

For the first time since 2002, WSU volleyball will be playing in the Sweet Sixteen of the NCAA Tournament after defeating Tennessee in four sets Saturday in Bohler Gym.

This year marks the third consecutive season the Cougars (23-9, 12-8) made it to the second round of the tournament and their first time hosting two rounds of tourney action since 2001.

Senior outside hitter McKenna Woodford said she is honored to be a part of this group of seniors who have made such a mark on the program.

“This has never happened to us,” Woodford said. “For two years in the past this was where we ended.”

For the second night in a row, the Cougars won a match in four sets in front of a packed home crowd that brought the energy the entire night.

Down 11-9, WSU got Bohler Gym back into it with a big point and handed the service to senior outside hitter Taylor Mims.

WSU Head Coach Jen Greeny said that Tennessee came out swinging, but the Cougs were able to fight back.

WSU seemed to have all of the momentum but couldn’t get out of its own way with poor passing and miscommunication leading to a timeout by Greeny.

Out of a Tennessee timeout, the Lady Vols scored twice to get to set point at 24-22. WSU clawed back again and tied it at 24.

Greeny said that getting the first set was absolutely huge.

“Anytime you can get the first set it puts pressure on the other team,” she said.

WSU got out to an early lead in the second set. Junior libero Alexis Dirige served an ace to give the Cougs an 8-3 lead over the Lady Vols.

UT fought back, but it wasn’t enough as the deficit was too much and the Cougars won the set 25-18.

As much as the second set went the Cougs way, the third set did just the opposite as UT came out of the break hot and showed they came to play.

The Lady Vols took an early 8-6 lead and extended that to 21-16. Despite a valiant attempt, WSU could not come back and lost the third set 25-19.

Greeny said that she called a timeout in the middle of the third set to talk to her team after the set wasn’t going WSU’s way.

She said she told them that they can’t get all of the points they were trailing by back at once, so just chip away and create some momentum going forward.

“We ran off some points in the third and got momentum back,” Greeny said. “It really helped us going into the fourth set.”

The team in fact carried that momentum into the fourth set as senior middle blocker Claire Martin’s fifth block of the night gave the Cougars a 6-3 lead early on.

WSU extended its lead to 14-9 with a kill by junior setter Ashley Brown, forcing a UT timeout. Out of the timeout, the Cougs finished the set by winning 25-13.

With the victory, the Cougars advance to face No. 1 Stanford in the third round of the tournament. WSU has already faced the Cardinal twice this season and lost the first match up in three sets and the second in four.

Woodford acknowledged that Stanford is an incredible team, but she is ready to see what the Cougars can do.

“We’ve played down there before, this isn’t new to us,” Woodford said.

WSU will take on the Cardinal 5:30 p.m. Friday at Maples Pavilion.