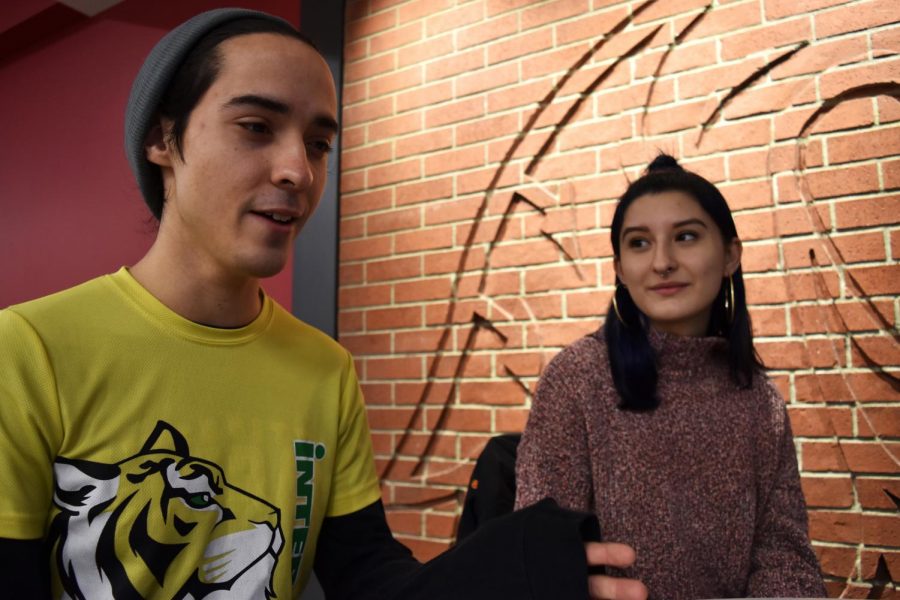 “By cooking for someone, you’re leaving them with something they’ll remember for a lifetime,” Chef Erik Kaufman, left, says Friday in the Chinook Student Center.

“I leave Dec. 15 and I won’t be coming back to Pullman, so this event is a way for me to leave a bit of myself here for people to remember me by,” Kaufman said. “I’m leaving a small part of who I am and a small part of what the Caribbean has to offer here in Pullman.”

Kaufman, on exchange from Universidad Interamericana de Puerto Rico – Recinto de San German, is very proud of his Puerto Rican heritage. He said he wanted to teach Cougs about it in the best way he can — food. He graduated from Escuela Hotelera de San Juan with a culinary arts degree in 2015.

People remember others through a shared love of food, he said.

“Food brings people together despite their differences,” Kaufman said. “By cooking for someone, you’re leaving them with something they’ll remember for a lifetime.”

Transfer zoology major Kellymarie Socarras said she worked with Kaufman to plan the afternoon of Puerto Rican cuisine. This is due to her roots in Cuban and Puerto Rican food. She said the two are regularly compared.

Socarras said she believes it’s important to share Caribbean cuisine with the Palouse because it’s not represented as often as that of other ethnicities.

“I almost feel like we’re minorities within a minority,” Socarras said. “So it’s really amazing when we all come together to support each other.”

She mentioned the number of Mexican students along with other Latinx ethnicities, but said there’s an even smaller demographic of Caribbean students.

“A lot of people ask where Puerto Rico is,” Kaufman said. “In some ways I understand because it’s a small rock, but it also has such a rich culture. Even in Martin Stadium during football games they play Puerto Rican music. If you’ve heard Bad Bunny, Daddy Yankee, Luis Fonsi — that’s all Puerto Rican music.”

This won’t mark Kaufman’s first time feeding Cougs his Puerto Rican cuisine. In September, he cooked as a guest chef at Southside Cafe for 600-700 people. The idea came to fruition after he considered some of the food he grew up with.

“I was explaining Puerto Rican cuisine to one of my coworkers and they were just mouth-watered,” Kaufman said. “We roast pork for eight hours and the fat under the skin will be completely buttery. We’ll season it with garlic, oregano, salt and pepper and nothing else and the pork will just obliterate in your mouth.”

Kaufman said he will start cooking at 1 p.m. and anyone who wants to watch and learn is welcome to since he wants to give people an experience rather than just free food.

The authentic Puerto Rican cuisine will be served from 3 to 5 p.m. Thursday at Casa Latina, 955 B Street. Food is free but will run out, so Kaufman recommends getting there early. The menu consists of rice with chicken, fried plantain disks and macaroni salad.

“I think it’s a little introduction to our home and what we’re about,” Socarras said. “Our grandmothers would always feed us so much and no matter how much food we’d have on our plate she’d say, ‘You’re skinny, you need more.’ Our food just completely represents the Caribbean.”