Provost Dan Bernardo to step down, move into new role 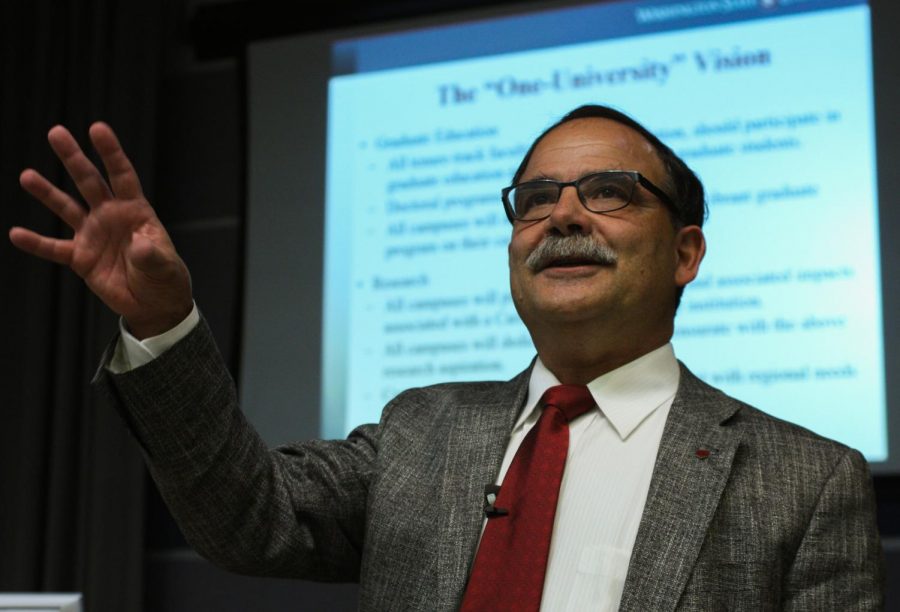 Dan Bernardo, WSU provost and executive vice president, has held several administrative positions over his 14-year career at WSU. Bernardo will continue to work for the university as a special adviser to university President Kirk Schulz.

Dan Bernardo, WSU provost and executive vice president, will step down from his position after 14 years as a WSU administrator once a replacement is hired.

Phil Weiler, vice president for marketing and communications for WSU, said Bernardo will remain in his role as provost until a replacement takes office, which is expected to occur during summer 2019. At that time, Bernardo will become a special adviser to the president, a part-time position.

“There’s a series of projects he will be working on for the university,” Weiler said of Bernardo’s new role.

Bernardo has served a number of administrative roles over the last 14 years including vice president of agriculture and extension services, Weiler said, and stepping in as interim university president following Elson S. Floyd’s death in 2015. Before that, he earned a doctorate in agricultural economics at WSU.

WSU has hired Isaacson, Miller, a company the university has used before, to conduct a nationwide search for a replacement, Weiler said.

“They know Washington state very well,” he said. “Each university has its own unique personality and when you work with a search firm they really know who the potential candidates might be … and based on that personality and the desires of the university they can do a much better job of identifying candidates and encouraging them to apply.”

While the university will welcome internal applicants, Weiler said there is not a current WSU faculty member in mind and that they are carrying out a “legitimate search nationwide.” The university will also reach out to students, staff and faculty on all WSU’s campuses to learn what people want from the new provost, he said.

Bernardo and President Kirk Schulz have spoken about Bernardo leaving and the decision was not a surprise for Schulz, Weiler said.

“My sense is that [Bernardo] just felt like the timing was right as he wants to step down from a full-time position to a less than full-time position,” he said. “This will give the university a long runway to be able to find somebody, get them on board and to make sure there is continuity and stability.”

He also said a note about Bernardo’s decision to step down was sent to faculty, but he had not yet seen the note as of Monday night.

WSU plans to release a statement about the move and set up a website for the provost search Tuesday, Weiler said.